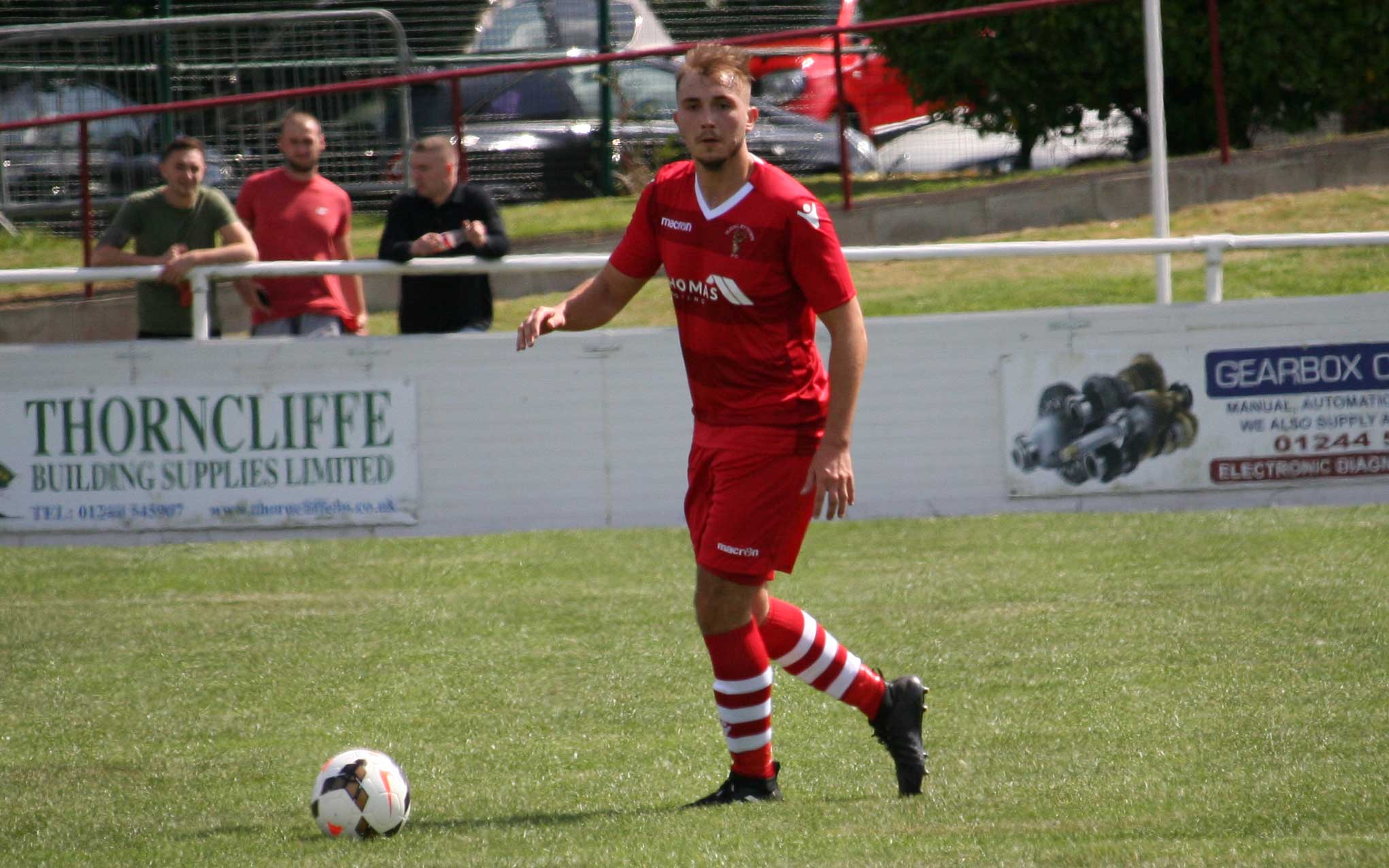 Somewhat under the radar, defender Rob Jones made his first competitive appearance in a Buckley Town shirt, since breaking and dislocating his ankle and leg at the beginning of last season in a Reserves game at FC Nomads. It was a horrific injury and one that any player would do really well to come back from and kick a ball again.

We caught up with him this week after the Reserves game at The Rock against Cefn Druids.

Q. How did it feel being back in competitive action for the first time in 18 months?

Yeh, I managed 60 minutes and started right back. It was the perfect game for me to come back to on a 3G pitch.

Q. How is the recovery going?

The recovery is difficult because the more I try and get back in the team, for example, with my fitness, training, etc, the more aches and pains I feel especially, for the next couple of days. Whereas when I rest… my ankle feels great but my fitness starts to decline, which is where I feel I’m taking a step back in my progress, so I’m trying my best to push myself.

Q. How long has it taken?

The injury happened back in August 2018… yes it’s a long time and the injury has really taken it out of me mentally and physically but I am determined to be back to my old self again.

Q. How long have you been back training?

I have been training on and off for a while now, as I don’t want to overload my injury too much and be out for a longer time.

Q. What was it like going back onto the field of play on Friday night? Any fears or were you just desperate to get out there?

I was very nervous but excited to get back on to the field. I am definitely making progress.

Q. Anyone you would like to thank who has aided you back to fitness?

I would like to thank all the lads that were there on the day for me when my injury happened, every single one was a massive help. I want to thank the coaching staff for getting me back involved with the lads and in training and constantly asking how I am and where I am up to in terms of progress. Lastly, I would like to thank the committee and the fans as I felt very welcome when I came back to the Globe to watch the lads when I was in my wheelchair and crutches.

Q. Add anything else you want to say yourself also?

I just want to thank everyone for all the support as it has been very difficult for me but now I am raring to get playing and back to the standard I was at. Up the Bucks!

Manager Dan Moore added, “We’re pleased to see Rob playing, he has actually been training for a number of weeks and felt ready enough to play for our reserves a couple of weeks back.

We were obviously gutted when he suffered the injury he did which kept him off his feet for 12 months. I know he’s been working hard in his own time and in training to give himself the best chance of fully recovering. It’s tough being injured and it’s not been easy for Rob, he’s had a couple of setbacks but he’s always been positive, his attitude is unquestionable.

We’ve seen in training over the past month that he’s well on his way in terms of recovery, he’s looked really sharp and very much like his old self. He’s a well-liked member of the squad who played an important role in our 17-18 run-in, and we hope to see him push on over the remainder of this season.

On a personal level I know I’ve not seen the best of him in a Buckley shirt, and of course, it’s my job to bring that out of him, so we will work hard to make it happen.”

Buckley Town Chairman Pete Gunson added, “I was at the game when the incident happened, most of us, including Rob, thought it would be a career-ending injury, it was one of the worst injuries I have witnessed.

I was lucky enough to be making a guest appearance in the dugout for Rob’s first game back, away at Cefn Druids, we didn’t get the result we wanted, but to say seeing Rob back on the pitch, and being part of the team ‘made my day’ is an understatement, he played 60 minutes with no problems.

Hard work and the support of family and friends has made Rob’s comeback possible, on behalf of myself and everyone at Buckley Town, I’d like to wish Rob all the best for the rest of the season, and hopefully many more years as a Buckley player!!”