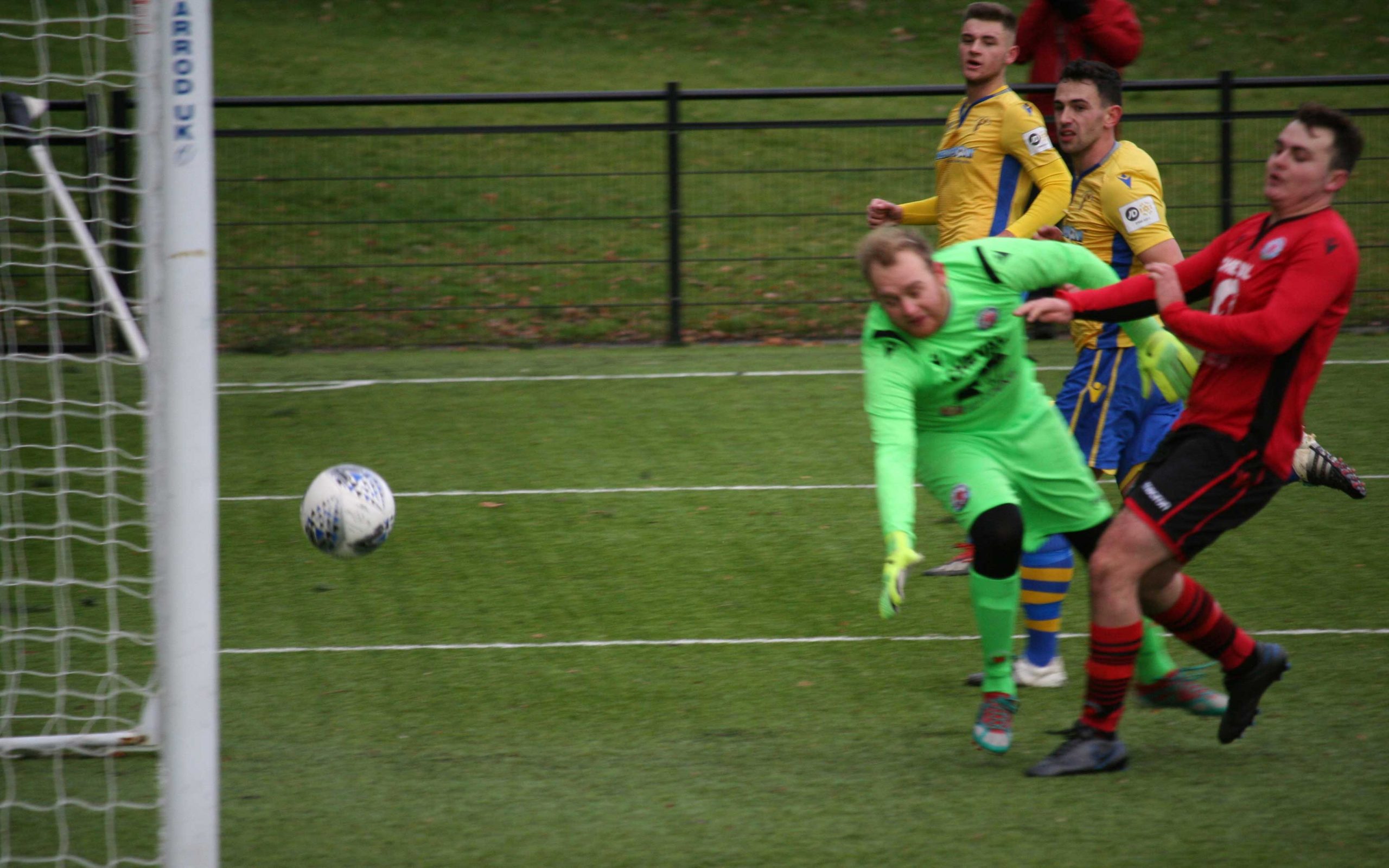 Tom Gunson scored Buckley Town’s first and then turned provider for Connor Littler in a 2-0 victory in the 1st Round of the WNL Reserves Division Cup at Bala FC’s Maes Tegid ground. The game had to be switched as the weather was making this tie almost impossible to be played on grass because of all the rain we have had in recent months in North Wales.

Buckley looked comfortable throughout in their victory and earned a quarter-final place in the competition where they will now play local rivals Mold Alex on the 1st February at Alyn Park with a 1:30 pm kick-off if it ever stops raining that is. 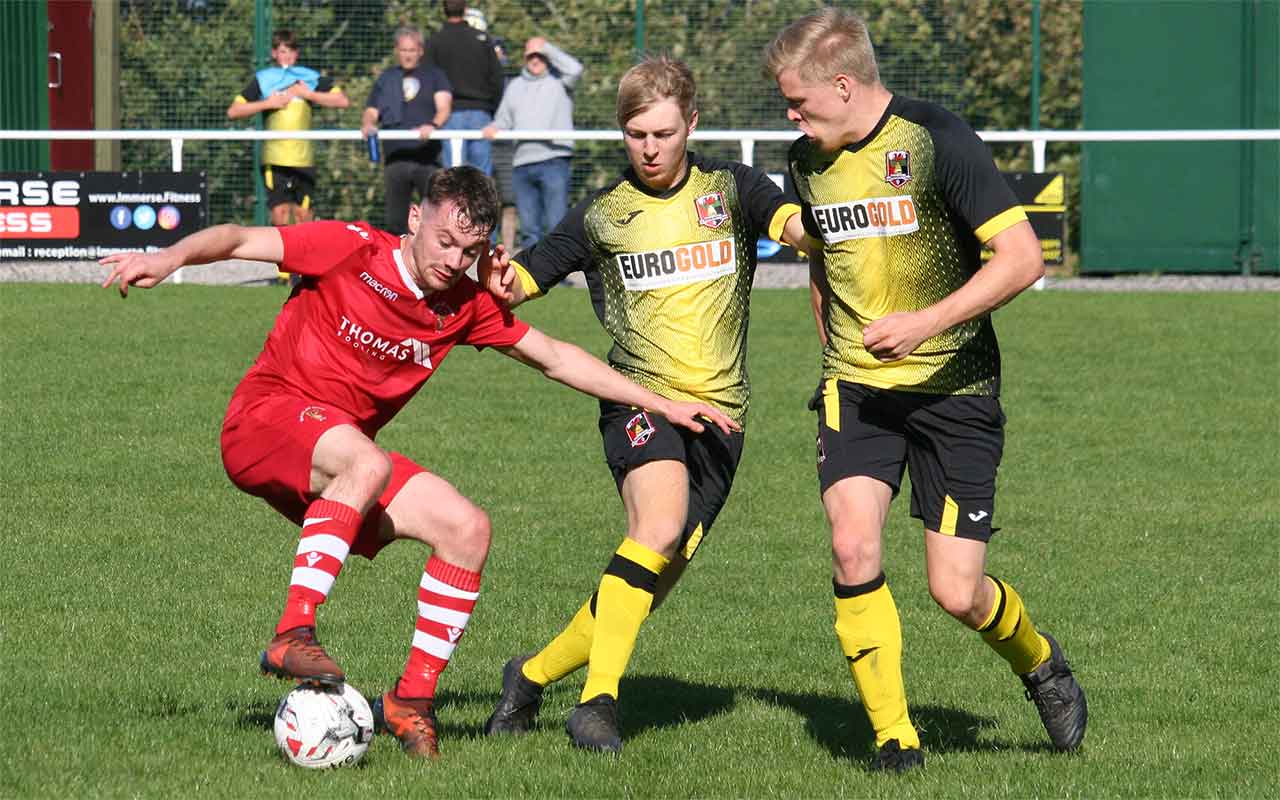 Today’s game between Buckley Town Reserves and Gresford Athletic Reserves ended in a 2-2 draw after Tom Gunson & Sam Spridgeon were on target for Buckley Town in a game of missed chances and decisions not given.

William Roberts scored both Gresford’s goals, the second being from the penalty spot. 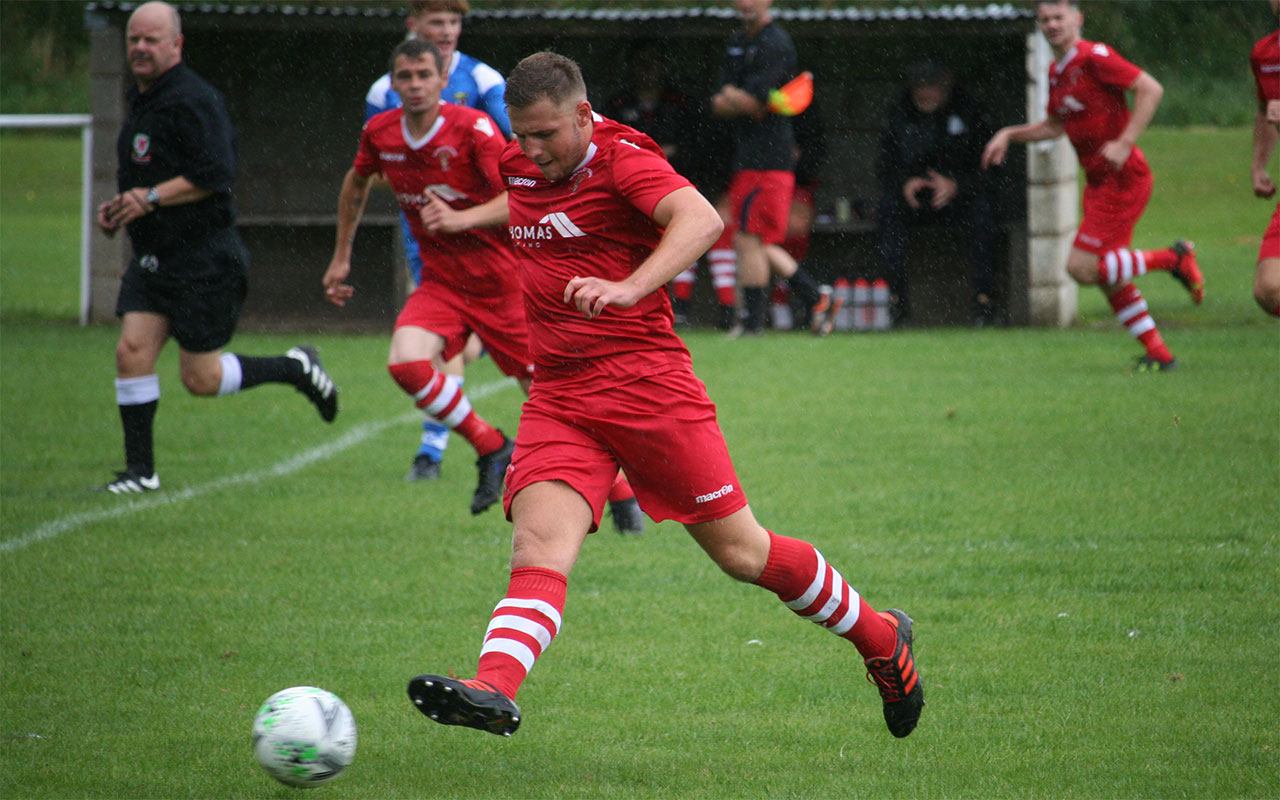 Buckley went into their Cup game against Gresford still smarting from last week’s defeat at Cefn Druids. That was a game they felt they should have won but they knew that their effort could not be faulted.

The game had a real Cup-tie feel to it and the first 20 minutes were filled with free kicks and offside decisions, which frustrated both teams. The best chance fell to Luke Woolley who was found in space by a trademark cross from Joe Trueman, he turned inside his man but his shot went just wide of the Gresford post.

The deadlock was finally broken in the 21st minute when a long ball cleared the Gresford back-line and the ever-vigilant Ryan Dunn ran through and lobbed the keeper for 1-0 Buckley.

The Bucks were now controlling the game and the Gresford keeper pulled off a superb save from a Joe Trueman free-kick from 20 yards out in the 33rd minute.  In fairness to Gresford kept on working hard and their patience finally paid off in the 44th minute when they were awarded a free kick on the Buckley 18 yard line. Up stepped Jake Eyre who chipped the Buckley wall and found the bottom corner of the net to make it all square at half time.

Buckley still looked assured in the second half and enjoyed most of the meaningful possession. Tom Boulton and Dave Gleave were running the show.  Tom Gunson was linking up well with Woolley and Pierce but they could not get the better of the Gresford keeper. Dave McDermott thought he had put Buckley ahead in the 70th minute but his header from a free-kick went agonisingly over the Gresford bar.

Results often hinge on refereeing decisions and 78 minutes in saw a potential game-changing incident. A long hopeful ball from Gresford cleared the Buckley defence and the Buckley captain Ryan Dunn found himself in an unenviable situation. He was the last man as the Gresford striker rounded the Buckley keeper. His last-ditch tackle took the man and the ball. Refs decision – penalty and a red card! So Buckley were down to 10 men and Selvester in the nets facing a penalty. Game-changer? Well everyone seemed to think so as Jake Eyre stepped up…..only to shoot wide. Game on.

Whilst Gresford were enjoying more possession down their right, the Buckley back four were well organised and defended on the 18 yard line, ensuring any Gresford shots were from distance and well handled by Selvester.

The new centre half pairing of Dave McDermott and Ry Brown never looked troubled and full backs Joe Trueman and Alex Roberts linked up well with the midfield, especially Woolley, who dropped deep to support Roberts. However you do not always get what you deserve in football and Buckley found themselves 2-1 down in the 82nd minute when they failed to deal with a hopeful Gresford ball into the box.

Despite being down to 10 men Buckley dug deep and kept on pressing forward. Kal Pierce picked the ball up in his own half and played a sublime one two with Gunson, powered into the box but was unfortunate to see his shot cannon back off the crossbar in the 85th minute. Buckley were finally rewarded in the 89th minute when Dave Gleave headed on a cross and Pierce rose to head home for 2-2.

So into extra time and 2 minutes in Pierce was upended by the Gresford keeper in the box just as he rounded him. Another big refereeing decision! Penalty awarded but no card for the keeper.  Pierce stepped up and finished confidently to put the Bucks ahead 3-2.

Ben Waddilove had been introduced after 90 minutes with Buckley changing their formation to 3-4-2 and he competently linked up with Trueman as they took the game to Gresford with Pierce always available and chasing down all the through-balls. Gresford didn’t trouble Selvester in the Buckley nets during the first 15 minutes of extra time.

The 2nd period saw Buckley controlling possession. Jarrod Christopher replaced Dave Gleave who had put a massive shift in! It looked as if Buckley had got their game management spot on until a hopeful cross/shot into the Buckley box found a Gresford player at the back post and he headed home to draw the game level.

Buckley kept pushing forward and even in the last minute Ry Brown headed wide from a corner, let’s not talk about the empty net!

So we moved onto the lottery of penalties. The last time the Buckley team were in a penalty shootout was when they lost last year’s Cup-final, so all to play for and a heartbreaking memory to erase and they did that with style! 7-6 winners with Kal Pierce, Tom Boulton, Joe Trueman, Luke Woolley, Jarrod Christopher all scoring and Dale Selvester saving two in the Buckley net.

That left Tom Gunson to claim the winner with a powerful shot that hit the top corner of the Gresford net giving their keeper no chance!

Let’s not forget how young some of those penalty takers were!

So….next round is a home draw v Ruthin.

What an emotional roller coaster of a game summed up by :