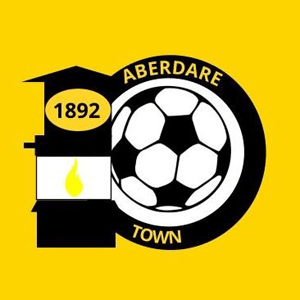 Aberdare Town FC is a Welsh football club that plays in the South Wales Alliance League Premier Division, the fourth tier of the Welsh football pyramid. Their ground is situated on Cardiff Road, Aberdare, between the suburb of Aberaman and the village of Abercwmboi. They are a former member of the Welsh Football League.

Aberaman was founded in 1892 and joined the Southern League in 1919. In 1926 they merged with nearby Aberdare Athletic, then of the Football League Third Division South to form Aberdare & Aberaman Athletic. However the merged club dropped out of the Football League in 1927 and the arrangement came to an end the following year; Aberaman broke off and started competing as a single club again, while Aberdare promptly folded.

Aberaman continued to compete as a single club until 1945 when another combined Aberdare & Aberaman Athletic FC was re-formed. Once again, the merged clubs only lasted two years, and Aberaman went their separate way in 1947, and have continued in that form to this day.

From 2004 to 2009, the club was known as ENTO Aberaman Athletic due to a sponsorship agreement. The agreement ran out after the 2008–09 season, and the club reverted to its original name. For the 2012–13 season, the club adopted the name Aberdare Town F.C.

At the end of the 2019–20 season, the club was relegated to the South Wales Alliance League Premier Division.