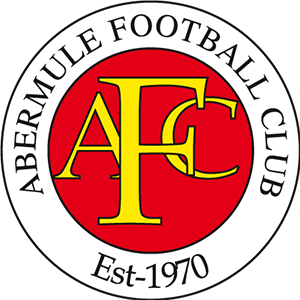 Abermule AFC formed in 1969 to play a number of friendly matches against neighbouring sides but did not officially enter the Montgomeryshire league until a year later in 1970.

The club had a steady start to life and managed to pick up silverware on a regular basis during its infancy in the lower Montgomeryshire league. After many years of sustaining good league positions and competing in the latter stages of the cup competitions, the club realised its potential in the 1986 season gaining promotion along with 2 cup triumphs in the Village and Bishops Castle cups.

One thing all teams need is support and in 1989 a new stand was officially opened for those supporters to enjoy the game in comfort, that stand is the one you see before you today! The club has had many players over the years represent the league against other welsh regions, one being the clubs most successful player, former manager and current chairman Gwyn Hamer.

2004 saw the club have one of its most successful seasons in recent history by finishing 3rd in the amateur 1st division and reaching 3 cup finals, losing to Knighton Town in the Emrys Morgan final but beating local rivals Montgomery town and Kerry in the Mike Harris Trophy and Consolation cup respectively.

Off the back of this and with many youngsters joining the club a decision was made to field the club’s 1st ever reserve team for the 2005 season. The second string ran for just 2 years but many of the youngsters progressed into the 1st team such as Alex Bromley who was voted player of the season in his first year.

This brings us up to the present day with the club celebrating 40 years of existence by playing above the amateur league for the first time. Who knows where we will be in another 40 years time but one thing for sure is that we will enjoy every moment and hope that our supporters, sponsors, and players continue to make this a very friendly community run club.