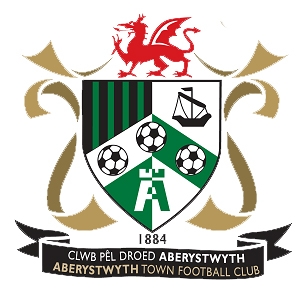 Although Aberystwyth Town FC was formed in 1884, the club probably existed in the 1870s in an earlier incarnation – the re-establishment of a “town” club is recorded in 1876. Their early days were marked by friendly matches and it was not until 1896 that the club first joined a league – the Welsh League.

After only one season they reverted to playing friendly matches but were firmly on the map in 1900, convincingly beating fancied Druids 3-0 in the Welsh Cup final and becoming the first team from West Wales to take the trophy. But this Welsh Cup victory almost proved to be their downfall as they hit a massive financial crisis and a mass exodus of players.

Aber’s league career has a nomadic flavour, as they have been members of various leagues since they entered the first competition, the Welsh League, in 1896. That foray lasted only one season and they returned to playing friendly fixtures but did enter the English FA Cup on a few occasions. With interest in the club rekindled, they joined the “Combination” but again for only one term, probably because of the expense of travelling.

Aber were members of the Montgomeryshire & District League from 1904, winning several championships, and with the advent of the Welsh National League in 1921 joined the Central Section. The club was very successful in the 1920s – achieving six title wins – and took the Mid-Wales League title in 1933 and 1950. Aber won the Welsh Amateur Cup in 1931 and 1933 and were finalists in 1935 and 1972.

The club began a long stay in the Welsh League (South) in 1951, although they continued to also field a team in the Mid-Wales League, and for a time in the Cambrian Coast League. They eventually returned to mid-Wales competition in 1963 but did not win the league championship until 1984, after finishing as runners-up on six occasions. They retained the title the following season, both under team boss Meirion Appleton.

Aber were, by then, firmly established as one of the premier clubs in mid-Wales and in 1987 they returned to the Welsh League (South). They were three times runners-up before their inclusion as founder members of the League of Wales. Aber achieved their best LoW position – 3rd – in their first season and the club’s administrative and social set up are now well established.

After struggling for a few seasons in the League, and flirting with relegation in 1996/7, it took until February for the Black & Greens to gain a home win. Aberystwyth at last found some success in 1998/9 when they qualified to represent Wales in the UEFA InterToto cup competition. They did this by virtue of finishing fourth in the league on 57 points behind Barry on 76, Inter Cable-Tel on 63 and Cwmbran who took third place on goal difference.

This took place part-way through the season as a result of Aber crashing 5-0 at home to Caersws in a league game. Powell took over the reins of the club and led the Black & Greens into European competition for the first time. It was a memorable event with Aberystwyth narrowly losing 3-4 over two legs against Floriana of Malta.

The success of European qualification brought many changes to Park Avenue. A new BBC studio and TV gantry, followed by the new “Dias” stand which brought the number of seats in the two stands up to nearly 600. The “Dias” stand being named after club legend David “Dias” Williams who holds the club scoring record of 476 goals in only 433 games between 1966 and 1983.

The pressures of maintaining the standards achieved in 1999, and the ongoing upgrading of the stadium left the club financially stretched in the 2000/2001 season. Consequently they were unable to repeat the feat of attaining a European berth, just missing out by three points, although the club gained entry to the FAW Premier cup competition for the third year running. They managed to progress to the quarter-finals twice. Barry Powell paid the price for his failure to qualify for Europe, and left the club by mutual consent.

Powell was replaced at the beginning of the 2001/2 season by Frank Gregan. Frank had a very impressive background in English non-league football and was unanimously voted into the job as new manager prior to the start of the season. He was responsible for bringing in several players with extensive experience in the English pyramid, but it took too long for him to produce any kind of consistency on the field of play. When Gregan was linked with the Dr Martens League Western division club, Weston-super-Mare – and the team suffered an ignominious home exit from the Welsh Cup at the hands of CC Sports league Aberaman Athletic in October 2001 – the writing was on the wall for Mr Gregan. This was combined with a poor away record and an exit from the lucrative latter stages of the FAW Premier cup at the hands of Caersws.

Gary Finley took over as player/manager immediately after Gregan departed for Weston. There was an instant improvement in form and with minimal additions to the squad despite most of Gregan’s signings departing, a top eight finish looked possible. The club just missed out on the FAW Premier cup ending up in ninth place in the league on 51 points which was seven points adrift of the UEFA InterToto cup spot claimed by Caersws. They elected to play their home tie in the competition at Park Avenue, and like Carmarthen Town did the year before, Park Avenue witnessed the third undefeated Euro performance in four seasons, as Caersws drew 1-1.

Finley took the club to equal its best-ever finish of fourth in 2003/4 and again qualify for Europe, via the Uefa InterToto Cup, but following a policy decision to base the team on more local players, Finley departed with the Merseyside contingent and David Burrows took over as player/manager.

The change of strategy produced a worsening of results in 2004/5, but the club’s management decided to stick with the Ceredigion player policy despite seeing Park Avenue attendances slump by nearly 40%.

The club also received a further set-back in December 2004 when a serious fire destroyed much of the social club’s facilities, ruling out the ground for the staging of cup finals until the new John Charles lounge was opened in 2005.

After several undistinguished seasons, the Seasiders reached the final of the Welsh Cup in 2009 under manager Brian Coyne, only to be beaten 2-0 by Bangor City. Coyne stepped down early the following season with Alan Morgan appointed as the new boss, and the club had one of it’s best finishes for years, finished in 4th in the 2009/10 season, narrowly missing out on qualification for Europe to Port Talbot Town.

Then under the first season of the Welsh Premier League Super 12, Aberystwyth, although in top 6 for most of the first half of the season, saw themselves in the bottom half of the table at the mid season split, being beaten to the top half again by Port Talbot. The club finished in 7th place, before beating Airbus in the Europa League playoff quarter final, and eventually losing out to Neath in the Semi-Final.

The 2011/2012 season was something of a struggle, with ill-discipline taking its toll on the performances of the team overall. Aberystwyth Town found itself in the bottom 6 again, and in a real relegation battle. After a defeat to Cymru Alliance side Cefn Druids in the Welsh Cup, Alan Morgan stepped aside and the board made no hesitation in bringing back Tomi Morgan. Under Tomi the team rallied and managed to finish in 8th place, and so managed to qualify once again for the end of season Europa League playoffs. After beating Airbus in the quarter finals, Aber faced Llanelli, and although the team all performed admirably, it was to be another season of disappointment as Llanelli won in extra time.