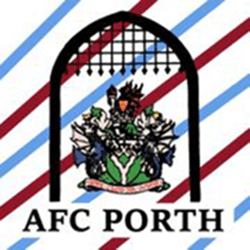 The club was originally founded in 1950 as Beatus United before changing its name to Porth in 1986. Porth won the Second Division of the Welsh Football League in 1993 and spent several years in the First Division. The club changed its name to A.F.C. Rhondda in 1996 but reverted back to Porth in 2004.

The town of Porth in the Rhondda Valley had been represented by several football teams, including Porth, Porth United, and Porth Welfare prior to 1950. The same year, a new club was formed under the guise of Beatus United which represented a local factory. The club competed under the name for 34 years in the Rhondda League and later the South Wales Amateur League before it was renamed as A.F.C. Porth in 1984. The side won the Second Division of the Welsh Football League in the 1991–92 season. When the Welsh football league system was restructured ahead of the following campaign with the foundation of the League of Wales, Porth remained in the Second Division, although it had effectively been promoted due to the restructure.

The side finished as winners of the Second Division for the second consecutive season and won promotion to the First Division of the Welsh Football League. In 1996, the club was renamed as A.F.C. Rhondda in the hope of increasing the club’s profile. The newly renamed club initially enjoyed improved results, finishing in the top three of the First Division twice between 1997 and 1999. However, having finished in the top eight for five consecutive seasons, the club was relegated after finishing bottom of the division during the 2001–02 season. A second straight relegation in the following season led the team to the Third Division. The club reverted to its previous name, A.F.C. Porth in 2004.