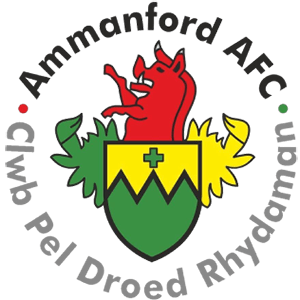 Ammanford AFC was founded as Betws sometime during 1945 and 1946, with its headquarters at the Coopers Hotel, when Mr. Vic Grove donated the gift of a chicken for a raffle and from the revenue came the beginning of the club.

Association football had been played at Betws in the 1920s by Ammanford Thursdays, made up of shop assistants who were only available to play on Thursday afternoons when it was half-day closing at the shops. They played their matches on Caemawr (a council housing estate was built on this field in 1947).

In the 1930s the Ammanford Corinthians, who were members of the Gwalia and Llanelli leagues, played on Betws Park. The first team and founders of the Betws Soccer club were known as the ‘Betws Blackbirds’. The first president was Sam Roberts, Chairman: D.R. Davies, Secretary: Robert Freeman and Treasurer: Joel Williams. The Trustees were Joe Lewis and Ben Jacob. Crad Jones and Vic Edwards were also among the early administrators of the club.

In the early years the Betws Blackbirds were playing friendly matches, before joining the Ammanford and District league: they later joined the Carmarthenshire League. Matches were played on the present Rice Road ground, and their dressing rooms were in the old building at the rear of the Coopers Hotel. The Betws team had tremendous local support and large crowds of followers turned out to watch every home game.

When the club joined the new Ammanford District League their opponents included Folland Rovers, Cathan Stars, Tycroes, Waterloo Wanderers, Pontardulais, Brynaman, Pontyberem, Penygroes, and Tairgwaith. One of the most remarkable features of this period was that sufficient finance was obtained to purchase the playing field. It is to the committee of that time that full credit must be given for their wisdom and initiative in negotiating the purchase of the field. Later, the adjoining land, which was used as garden allotments, was purchased. Today it is the site of the clubhouse; the price paid for the ground was £750.

As the team continued to progress, in 1949 the need for a higher standard of football in the locality was put forward at a meeting of the Welsh league at Bridgend. The past performances of the disbanded Ammanford Corinthians may have played a part in the election of the club to the Welsh League, where they played in division two (West). In 1952, the club reached the final of the West Wales Amateur Cup, narrowly losing to Atlas Sports, Fforestfach, 3-2 on the Vetch Field, Swansea.

With Mr. Danny Finch as their manager, the club finished runners up to Llanelli in the season 1957-58. The following season was very successful: on beating rivals Carmarthen Town on Boxing Day before a huge crowd, Betws became league leaders which they held to become champions and win promotion to the first division. They also won the division two cup, beating the champions of division two (East), Tredomen, at Rice Road by 3 goals to 2, Betws goal scorers being Idris Lewis (2), and Billy Abramson.

The ladies supporters in their makeshift facilities in an old shed at the entrance to the ground provided refreshments at every home game. The dedication of the ladies supporters and their contribution to provide revenue and entertainment played a big part in the club finance. Along with the hard-working committee members, there were many unmentioned helpers who all contributed in keeping the soccer flag flying. The club also provided a darts, tennis and cricket section.

On Saturday 22 August 1959, the club played its opening fixture in the first division of the Welsh League at home before a packed ground against Cardiff City, whom they beat by 2 goals to 1. On this memorable day for the club, the Betws team was: Harrison, H. Williams, D. Jones, Lee, Scrine, Stead, Chennard, Lewis, T. Williams, Loftus, and Abramson. Stead (penalty) and T. Williams being the scorers. By the end of the season, the club finished in the bottom half of the division and the following season being relegated.

Name change
There were other teams playing in the league under the name of Betws. In order to avoid the confusion over-identification of previous seasons, a request by the Welsh League in 1960 resulted in the club changing its name to Ammanford Town. Through the loyal support of their followers the club, having built a clubhouse in 1963, expanded in 1967 by building a stand, changing rooms, and showers at a cost of £4,000.

In 1964, the club appointed Roy Saunders as their player-manager, the former Liverpool and Swansea Town player. It was the time during his association with the club that proved its most successful. In season 1965-66 they became champions of division one, and the following two seasons became runners up of the Premier Division, to Cardiff City on both occasions.

Now it could be seen that ‘the village beyond the river’ was really amongst the giants of Welsh league football. Local players in the town team were Mike Lewis and Ioan Rees who have given valuable service, whilst goalkeeper Dai Davies went on to play for Swansea, Everton, Wrexham andWales. In 1969, Roy Saunders left the club to take up a coaching appointment to Swansea Town. Upon the departure of Roy Saunders, Evan Powell took over as manager assisted by Myrddin Price as secretary.

On the cup scene, the biggest day was in January 1991 when they played at home in the 4th round of the Welsh Cup against Wrexham. In atrocious weather conditions, ‘Town’ put up a gutsy performance but lost 5-0 to their more experienced opponents.

Merger
In the 1980s, with a growing recession and the decline in the club’s fortunes with poor attendance, they did, for financial reasons, consider withdrawing from the Welsh League. However, the club were still members of the league at the end of the millennium having amalgamated with local Ammanford Athletic A.F.C. in 1992.

During the 1998-99 season, the club reached the quarterfinals of both the Welsh Cup and the Flocon Cup, securing a return to Division 1. In preparation for this return, joint team managers Neil Petherbridge and Wynne Jones assembled a team consisting mainly of local lads. They put into motion plans to develop the Rice Road facilities, bringing them up to modern-day standards.