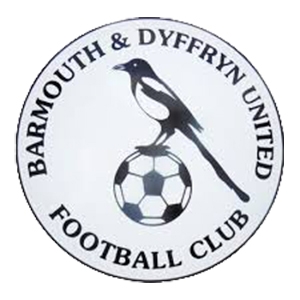 Barmouth & Dyffryn United Football Club is a Welsh football club based in the coastal town of Barmouth, Gwynedd, also representing the nearby town of Dyffryn Ardudwy. They play in the Mid Wales Football League West Division. The “Magpies” play their games at the Wern Mynach. Barmouth also has a strong youth team, with many players who played for Barmouth playing for football league academies in Wales. The Magpies won the league in 2011 after a hard-working season, Barmouth also competes in the Football Association of Wales cup competitions, along with cup competitions sanctioned by the North Wales Coast Football Association.

Barmouth joined the Central Wales League in 1963 and were champions in the 1969–70 season, also reaching the fifth round of the Welsh Cup, playing Cardiff City F.C. Barmouth won the NWCFA Challenge Cup in 1969 and 1971. They won the Central Wales Challenge Cup in 1973. The club resigned from the CWL at the end of the 1972–73 season and reappeared in the Aberystwyth & District League in 1978–79.

In 2006–07 they were runners-up in the Gwynedd League title but were promoted to the Welsh Alliance League on appeal. They finished tenth in the first full season and fourth in 2009–2010.