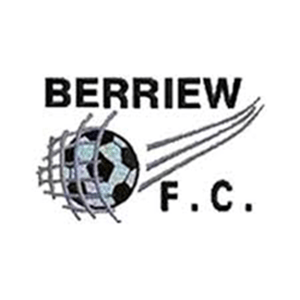 Football has been played in Berriew since the late 1800s, with the first games on record being Berriew v Garthmyl on Good Friday in 1899 and Berriew v Chirbury in 1905. Until the Second World War most games featuring Berriew appear to have been either friendlies or cup games.

In 1962 the club entered the Mid Wales League in which all major clubs in the area played in at that time. An ex-professional footballer George Antonio, who previously played for Stoke City amongst other top clubs, was appointed as player/manager and under his guidance, Berriew won the league in 1965 and the league cup in 1966. When he finally retired in 1968 the famous Stanley Matthews played in Berriew in a testimonial match for him.

The club returned to the Amateur League in 1982 and during the next decade, several trophies were won. This included the most decorated season in 1987-1988 when the league, league cup, and Village cup were all won.

The club went from strength to strength following their return to the Mid Wales League winning the Mid Wales League Cup before a second-place finish in 2009 meant that for the first time in the clubs history a place in the Cymru Alliance (Tier 2) for the 2009/2010 season was secured. Despite a 12th placed finish, Berriew were relegated due to the reduction in size of the Welsh Premier League and subsequent re-organisation of the pyramid system.

In recent years Berriew has continued to finish high up in the Mid Wales League and under current manager, David Jones has also won the Mid Wales League Cup, and in 2019 the Central Wales FA Cup for the first time in the club’s history. The club also has a thriving junior set up which has been awarded a platinum award by the FAW, with teams from under 7’s up to the youth team. The club will also field a reserve team in the new FAW Reserve League North.

Over the years players gaining international recognition include Pryce Jones, Dennis Evans, and Colin Jones who all played at Welsh Schoolboy level.