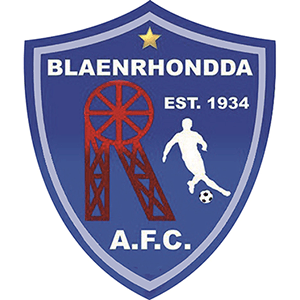 Blaenrhondda AFC is a football club based in the village of Blaenrhondda in Rhondda Cynon Taf, Wales. The club currently plays in the South Wales Alliance League Premier Division, in tier four of the Welsh football league pyramid.

The club has a significant history in Welsh Football League, including periods in the top two divisions from the 1970s to the 1990s.

After dropping out of the Welsh Football League the club played in the South Wales Amateur League, before dropping into the Rhondda & District League. The club joined the South Wales Alliance League for the 2017–18 season. Since then the club has secured back-to-back promotions – winning the Second Division in 2017–18 and finishing First Division runners-up in the 2018–19 season, gaining promotion to the Premier Division.