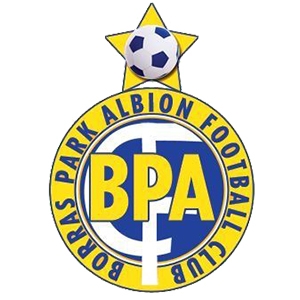 Borras Park Albion FC were formed 32 years ago as a Youth Football Club. It was formed from two street teams in Borras Park which were Clark Road and Monmouth Road. The chairman and manager was Mr Bob Groom and his wife Shelagh, was an administrator.

After the first year, a trip was organised to New York and Borras played in a very large tournament in Long Island. The following year a twinning was formed between TUS Plettenberg in Germany. Plettenberg is South East of Cologne, 24km from Ludenscheid. There are many exchanges in existence but this has probably been the most successful and in April 2009 we had our 29th exchange in Plettenberg. Approximately 600 people from Borras have visited Plettenberg and 600+ from Plettenberg have visited Borras.

From this small beginning, the club grew and entered the Wrexham and District Youth League. They have won many age group league titles and North East Wales Cups and now run teams in all age groups from U8’s to U16’s, in the U12, U14 and U15 we run two teams in each age group. One of the teams in each age group is known as FC Borras but are full members of Borras Park Albion. Each weekend over 250 players turn out for Borras Park Albion making them one of the largest clubs in Wales.

They take 2 or 3 teams each year to play in the Ian Rush international tournament in Aberystwyth. Several of their ex-players have made it to play in professional football, the most well-known being Chris Armstrong.

In 1998/1999 they decided to form a Senior team and what a successful season that was, under the managership of Allen Sumner. The team won the Welsh National Division 2 Championship, the League Cup, and the Horrace Wynne Cup. A reserve team was founded the following season and the first team again won promotion to the premiership. That year we also entered a Colts team in the newly formed section 3 of the Welsh National League.