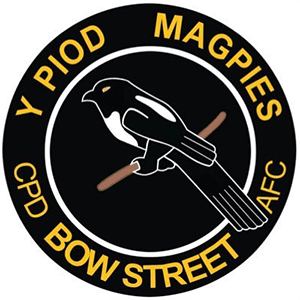 Bow Street Football Club was founded originally in around 1920. The club was out of action for two periods in the 20th century but the club has been fully operational since 1976. For many years the club played in the Aberystwyth and District League winning every single trophy available on a regular basis, especially in the 1990s and early 2000s.

Bow Street FC is still the only club to have won the highly prestigious Emrys Morgan Cup on three occasions – 1983, 2000, and in 2006 when they beat fellow Ceredigion side Crannog in front of a huge crowd at Park Avenue, Aberystwyth.

In 2007, after several successful league campaigns, the club finally decided to make the move and step up to compete at a higher level. Bow Street FC joined the Spar Mid Wales League for season 2007-08, and has enjoyed 13 successful and enjoyable terms at this higher standard of football. The club has invariably finished in the top half of the league, twice as high as fourth, in what was a highly competitive division.

Bow Street also reached the Mid Wales League Cup Final on five occasions, losing the first four, but eventually in May 2018 beating Welshpool 4-3 to finally lift the trophy. Playing at the higher level has meant entry to the Welsh Cup, and the club has fond memories of exciting encounters with Carmarthen Town and Cardiff Met.

The club has a successful junior development section which is the envy of many clubs and annually hosts one of Wales’ most successful Junior Football Festivals every July, which attracts around 140 teams, held over two days in July. In light of the Club’s track record in developing young players, the club was invited by Swansea City to be a part of their Club Support initiative and has enjoyed a productive partnership since 2015.

The Club prides itself on having some of the best facilities in Mid Wales and plays an important part in the wider community, with a strong committee and broad volunteer network. The Club’s Life President is the respected Lord Elystan Morgan who until February 2020 sat in the House of Lords.