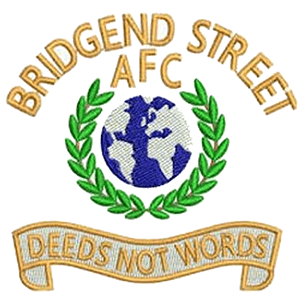 Bridgend Street AFC was formed in 1899 and is a Welsh football club based in the Splott district of Cardiff. The club currently plays in the South Wales Alliance League Premier Division, the fourth tier of football in the Welsh pyramid.

Bridgend Street AFC won multiple trophies under the management of Laurence “Lollar” Marshall and Edward Crawley throughout the 1970s and 1980s. With the newly formed South Wales Senior League, the club then won their place in that league in 1993 and went on to record five winners titles until their promotion to The Welsh Football League.

The Senior League’s CW Bruty Cup was won in 1997 after defeating Pentwyn Dynamos 2–1 in the final under the managership of Joe Feehan and a few seasons later, the first of the club’s Senior League titles was won under an ex-player Garry Fowler in the 2001–02 season whilst former players, Kingsley Lloyd, and Geraint Brooks led the club to two more South Wales Senior League titles in 2005 and 2006. This resulted in the duo receiving the South Wales FA Manager of The Year award. In 2007–08 the duo led the club to its then highest possible cup accolade. The team lifted the South Wales Senior Cup, beating South Wales Amateur League champions Corus (Port Talbot) in the final by a 2–1 scoreline. In addition, the team appeared in two consecutive CW Bruty Cup Finals in 2006 and 2007 losing both in a penalty shootout after the games were tied.

Promotion to the Welsh League came in 2010 after two back-to-back Senior League titles.

In the 2016–17 season, Bridgend Street reached the Welsh Football League Cup final, eliminating along the way Taffs Well (the holders of the cup for the past two seasons) and beating another Division One outfit Haverfordwest County 4–2 on penalties in the semi-final. Bridgend Street lost 3–1 to Llanelli Town in the Welsh League Cup Final at Old Road, Briton Ferry.

The 2017–18 season saw Street gain its first promotion within the Welsh League when they finished as runners up in the third division. With only two clubs gaining promotion from the 16 team division it looked like Street would narrowly miss out again, however, an incredible run in winning all of the final twelve games of the season saw them pip Trefelin BGC by goal difference. After gaining this achievement manager Craig Dale stood down from his role due to work and family commitments at the end of the promotion season and was replaced by former Grange Albion manager John Jones for the 2018–19 campaign.

In the summer of 2019, the club appointed former Cardiff City player and STM Sports FC coach Nathan Cadette as their new manager, replacing the outgoing Jones for the 2019–20 season. Cadette left the post in November 2020 and was replaced by former Newport County and Merthyr Town defender Craig Lima.