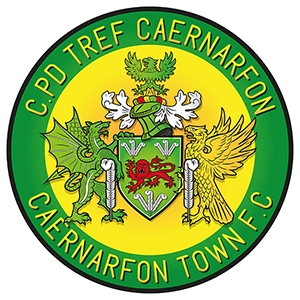 The first football club in Caernarfon, known as Caernarvon Athletic, was formed in September 1876 and played at various grounds before moving to the Oval in 1888. On 30th October 1886 Caernarfon were the 1st team from NW Wales to enter the English FA Cup and lost 10-1 away to Stoke City. Five years later, however, that particular club went out of existence but, in 1894, several former players began a new team called Caernarvon Ironopolis. That club competed in the North Wales Coast League, winning the championship on two occasions and reaching the semi-final of the Welsh Cup in 1900 and again in 1902. Unfortunately, following a dispute with the league, Ironopolis folded in 1903. The demise of the club resulted in some of the players forming the Caernarvon Colts while others affiliated to the Caernarvon RWF (Royal Welsh Fusiliers), both clubs playing at the Oval.

In March 2009, with finances at an all time low, and the club’s entire future in doubt, the Chairman, George Denham and fellow directors resigned. A group of current club officials and supporters took over the running of the Club and have put in place a plan to keep the Club in existence. A new management team of Geraint Williams and Ernie Talbot put together a locally based squad to see the club through the last games of the 2009/10 season.

The Club were relegated to the Welsh Alliance for the start of the 2010/11 season and appointed Clive Jones as their new manager after the sudden resignation of Geraint Williams. A new youth system also began to develop with the formation of an U18’s side, managed by ex-Town player Bryn Williams. The youth team will play in the Colwyn & Aberconwy Junior League. This season (2011/12) the youth team will play in the Anglesey Junior League and also take part in the Welsh Youth Cup, hoping to at least match achievement of getting to the quarter final stage this season.

After a poor run of results and with the Club on the bottom of the Welsh Alliance League (Division 1), Clive Jones left the managerial post by mutual consent. Steve ‘Psycho’ Smith was appointed manager in November 2010 with the task of keeping the Club in the Welsh Alliance Division 1 and developing a squad that can challenge for honours next season. Steve was assisted in this period by Colin Saynor (now joint manager) who stepped down from his role as Chairman of Llanberis FC, and head-coach Steven Bee decided to remain in his role. The Club managed to end the season in a creditable 5th place, losing only three of their matches since November 2010 and also managed to lift the Barritt Cup by beating Nefyn United in the final at Conwy United.

During season 2011/12 the aim was promotion to the Cymru Alliance under the leadership of Steve Smith and Colin Saynor but results did not go their way and Steve Smith resigned by mutual consent towards the end of the campaign. Colin Saynor took charge until the end of the season and Lee Dixon was selected as manager-elect during March 2012.

Lee Dixon took over the reins, assisted by Warren Gibbs and Nigel Barry and rebuilt the squad with numerous exciting additions. The squad played some excellent football during the season and managed to secure the treble of the Welsh Alliance League title, Cookson Cup and the FAW Trophy. Dixon built on the squad’s success by adding more quality players for the squad in order to challenge for honours in the Cymru Alliance League last season. The Club narrowly missed out on winning the League title after an indifferent period of form in January 2015 cost them vital points. Lee Dixon announced his resignation as first team manager before the end of the season.

A new, young manager was appointed in ex-Caersws midfielder Iwan Williams from Llanfairpwll. The club won the Cymru Alliance League in 2015/2016 season and won the League Cup but were denied promotion as the FAW Domestic Licence was refused. Cefn Druids were promoted to the Welsh Premier League instead as runners-up.

Unbowed by this setback, Iwan set about building another squad capable of winning the League in the 2016/17  season, but finished second to a very strong Prestatyn Town. On the positive side, the Canaries retained the League Cup and achieved the Domestic Licence for the first time in their history.

The club is looking to build on their success having been promoted to the Welsh Premier League.