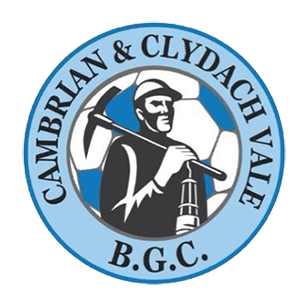 Cambrian & Clydach Vale Boys & Girls Club is a Welsh football club based in Clydach Vale in the Rhondda Valley. The club was founded in 1965 as Cambrian United and, after playing their football in the South Wales Amateur League for a number of years, they joined the Welsh Football League in 2005. A merger between Cambrian United and Clydach Vale Boys and Girls Club led to the current club. The side has risen through the divisions by finishing in promotion positions in Divisions Three and Two in successive seasons and are currently members of the Cymru South.

Cambrian & Clydach Vale was originally formed in 1965 as Cambrian United and was named after the local coal mine, Cambrian Colliery. In its formative years, the club played in the Rhondda & District League before joining the South Wales Corinthian League in 1972. In 1980, Cambrian United merged with Clydach Vale Boys and Girls Club but the merger proved disappointing as the club was nearly relegated out of the renamed South Wales Amateur League. The two clubs subsequently split.

In its first two seasons in the Welsh Football League, the club won consecutive promotions to reach the First Division by the 2007–08 season. The side has remained in the division for over a decade since. Former England manager Terry Venables, whose mother was from the Clydach Vale area, served as an honorary chairman of the club in the 2010s.

The club reached the final of the 2018–19 Welsh League Cup, beating several Welsh Premier League teams during the competition, including defending league and cup champions The New Saints. In the final, Cambrian lost 2–0 to Cardiff Metropolitan University at Jenner Park.