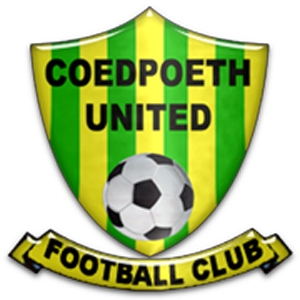 Recent history
Steve Wilk took over as manager from Steve Jones at the start of the 2011-12 season. They finished up 3rd in the league in his first season in charge. In 2012-13, the club reached its first senior cup final for many years, losing 1-0 in the WNL Premier Division final to local rivals, Brymbo at Cefn Druids. Coedpoeth United FC finished in 8th place in the league in the season ended 2012-13.

Steve Wilk remained in charge for the start of the 2013-14 season assembling arguably the strongest squad on paper they had for many years. After a tough first round of games, with only one point on the board after 6 games, Steve Wilk resigned. Steve Jones stepped back into management (after a brief unhappy spell at Brymbo) to bring the team up to finish away from the relegation zone in 11th place.

Due to new work commitments, Steve Jones was unable to continue as manager for the start of the 2014-15 season and so long-serving player John Griffiths stepped in to become player/manager with Andy Pryde as his player assistant.

The 2015-16 season saw the appointment of former Everton, Wrexham, and Wales international Dave Smallman as manager, however, Smallman left after only a few games and was replaced by long time player, and reserves coach Karl Fenlon.

The 2018-19 season was looking promising for the young U-19 squad managed by Karl Thomas and his assistant Jack Pawley, coming 2nd in the league the previous season, Karl’s team was looking to fulfill everyone’s expectations and finally win a senior trophy after a long 14-year wait. After a difficult but solid league campaign, Karl’s squad managed to win the league title while losing just 2 games and drawing once.