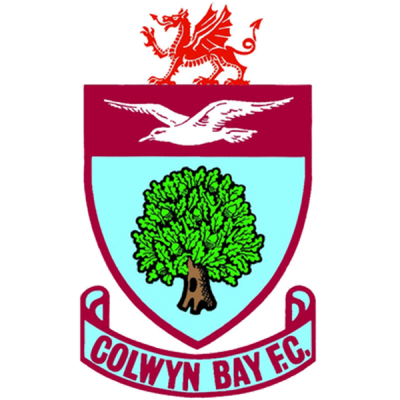 A Team representing Colwyn Bay played its first match in January 1881 and competed in the North Wales Coast Football League from 1901 until that competition folded in 1921 when the majority of clubs joined the Welsh National League.

The Bay enjoyed some success in this, winning the League Cup in 1928 and finishing as league runners-up in both 1928 and 1930 – which was to prove the last season for the competition. In July of that year, a meeting was held at the Albion Hotel in Chester with a view to setting up the Cheshire Football Combination in which clubs from Cheshire and North Wales would compete – the eventual title of the competition was the North Wales Football Combination. The Bay became founder members, playing in English football for the first time, and celebrated by taking the title at the end of the 1930/31 season.

The club then joined the Birmingham & District League with the likes of Worcester City, Cradley Heath, Wrexham Reserves and Kidderminster Harriers. Unfortunately, this gave them transport difficulties and results tailed off. Unable to halt a slide down the table, which saw them finish bottom in 1935-1936 and 1936-1937 seasons, it was perhaps not surprising that they resigned from the league to join the Welsh League (North) in 1937.

In 1984, the club crossed the border with election to the Bass North West Counties League. It was also at this time that the Bay left their Eirias Park ground for their present Llanelian Road base.

During their first season in the new league, the club was promoted from the Third Division and following re-organization of the leagues in 1987 the club was promoted to the First Division. The Bay, under manager Bryn Jones, gained further success, finishing fourth in the league and reaching the Final of the Raab Karcher League Cup Final where they lost to Warrington Town at Gigg Lane, Bury.

The club also reached the First Round Proper of the FA Cup for the first time in their history that season, losing 1-0 away to Northwich Victoria. The following season the Seagulls again reached the Final of the Raab Karcher Cup and gained revenge on Warrington Town winning 3-0, again at Bury. In 1990/91 the club finished runners up in the league to Knowsley United, but due to the demise of South Liverpool a vacancy was created in the Northern Premier League, and despite a strong challenge from North Shields to fill the vacancy, the club was duly elected to the Northern Premier League.

The 1991/92 campaign started with the club on the crest of a wave, topping the table and enjoying an FA Cup run which saw them fall to Morecambe in the final qualifying round. However in October 1991 news broke that the Football Association of Wales, in readiness for a creation of a new League of Wales, would withdraw a sanction for all non-league clubs currently playing in England. The FA of Wales was challenged by the clubs and an appeal was heard. This appeal was set up by the FAW and consisted of members selected by the FAW. The appeal was turned down.

To the credit of the players and management, off the field activities did not affect those on the pitch and the club went on to secure a league and cup double as well as the North Wales Coast Challenge Cup. The Welsh Cup semi-final was also reached including a 3-1 win over Wrexham; only days after the Football League side had beaten Arsenal in the FA Cup.

At the end of a highly successful first season in the Northern Premier League, the club had a big decision to make and gave it’s supporters a choice. Either join the new League of Wales or go into exile whilst the club continued its battle with the Welsh FA for the right to play in the English pyramid. Financially the clubs choice was not easy but was supported by the local council, townspeople and supporters alike. The fight was eventually finalised during April 1995 in the High Court in London and the Bay won the case against the Welsh FA.

At the end of the season, 2000/2001 manager Bryn Jones stepped down as manager after eighteen years at the helm to be replaced by long-serving centre half Colin Caton as player/manager. In his first season at the helm, the Bay maintained their Northern Premier League status, but the following season 2002/2003, the Bay were relegated for the first time in their history and Colin Caton stepped down as manager. The club was now struggling financially and had lost its sense of direction.

A new group of directors took over running the club partway through 2004. A new clubhouse was opened at the ground in Easter 2005. The club appointed Peter Davenport as the manager for the 2006-07 season but he left halfway through the season to be replaced by ex-Witton Albion manager Gary Finley. A strong end of season run saw the club into the play-offs where they were eventually defeated 3-2 by Cammell Laird to an injury-time winner.

At the end of the season, a new board was appointed with the ambition of reaching Conference level football within 5 years, developing the stadium and a community affairs programme.

The 2007/08 season was spent in the newly formed UniBond First Division North and regrettably, the team could not reproduce the form of the previous end of season run and finished outside the play-offs. As a result, a new manager was appointed in former Crewe player Steve Pope alongside the vastly experienced Paul Ogden as his assistant.

Following a disappointing start to the 2008/09 season, Steve Pope stood down as manager after only four league games. Two weeks later Neil Young was appointed as the new manager, assisted by former Tranmere Rovers and Nottingham Forest player Gary Jones. The team went on a winning streak that saw them rise from 17th to 3rd place, securing two successive UniBond ‘club of the month’ awards for February and March along the way. The team eventually secured a play-off position finishing in 4th position, almost unthinkable before Young’s appointment. This was the clubs highest league placing for many years. Unfortunately, a run of injuries and a recall for influential on-loan midfielder Ashton Taylor back to Tranmere dented the clubs play-off hopes and after a brave effort were eventually beaten away at Newcastle Blue Star on penalties. A cruel twist being that eventual play-off winners Newcastle BS soon later folded, denying the Bay and the other teams in UN1 who made the play-offs a place in the UniBond Premier League.

For the start of the 2009/10 season manager Neil Young made a number of signings in order to strengthen the side with the hope that the club could go one better this time around. Off the field, the club has managed to secure the biggest shirt sponsorship deal in the clubs history with The Co-operative Food Group. With a planned increase in community-based initiatives, the launch of the Elite Performance Centre for the best young players in the area and with efforts continuing on improving ground facilities, the club can look forward to a bright future.

The season started brightly for Colwyn Bay as they held the top spot for much of the season, but it was always a false position as the chasing pack had several games in hand over Colwyn Bay and with each game played, the gap continued to shrink. Colwyn Bay actually finished the season in 4th place and a massive 25 points behind eventual winners, FC Halifax and 21 points behind 2nd place Lancaster City.

This was enough to secure Colwyn Bay a 2nd successive season in the play-offs and this time the would make full use of them as they travelled to Curzon Ashton where the Bay came from behind to win 2-1, then travelled to the Giant Axe where in monsoon conditions, Colwyn Bay won the match, and promotion with a late penalty strike from Ian Sheridan.

Manager Neil Young decided to leave Colwyn Bay to join re-formed Chester at the end of the season and club captain and ex-Tranmere Rovers defender Dave Challinor was installed as player/manager. Challinor immediately brought in Colin Woodthorpe as his assistant.

Challinor’s confidence in his decision making, coupled with an eye for spotting players with the required attributes saw his young side get his first season in charge off to a flyer as they went straight to the top of the table. Such was the success of this team, Colwyn Bay were very rarely outside of the play-off places and finished 2nd in the league behind the much-fancied FC Halifax. After a comfortable win against North Ferriby, Colwyn Bay then went on to win 1-0 against FC United of Manchester to win promotion to the Blue Square Conference North.

Challinor and Woodthorpe, dropped a bombshell by moving on in October 2011 to take over at AFC Fylde and striker Jon Newby agreed to step up to take over as player-manager. He won the league’s Manager of the Month award within three months of taking over and successfully kept the team in the Conference North with a 12th place finish in their first season.

The following season, however, was a struggle on a tight budget and Newby was sacked in January 2013 after some disappointing results and replaced by former club goalkeeper Lee Williams.

He lasted only a month and after the team failed to win a point in four successive league defeats, he was replaced by ex-Chelsea and Leceister City defender Frank Sinclair.

He engineered a tremendous finish to the season as the team won six games in the space of 15 days to secure their Conference North status.

The Seagulls finished 12th after being in contention for the play-offs at one stage.

Sinclair was in charge for 23 months but resigned in January 2015 after a poor run of results. His assistant Gus Williams took over until the end of the season when the Seagulls were relegated on goal difference to end four seasons in the Conference North.

Williams then stood down with assistant and former Burnley winger Ash Hoskin taking over, assisted by former Macclesfield and Accrington Stanley manager Phil Staley. They both left in October 2015 after a disappointing start to the campaign, but Kevin Lynch, assisted by Peter Cumiskey, were unable to turn things around.

Since then Paul Moore and then his initial assistant Phill Hadland have both had spells in charge, before the management duo of Alan Morgan (ex-Tranmere Rovers) and Craig Hogg took over November 2017. In their first season, they missed the playoffs by just two points after suffering injuries to key players in the closing weeks.

Morgan parted company with the club in September 2018 with Hogg and Coverley taking charge as manager and assistant manager respectively.

Due to financial pressures, the club’s shareholders made the huge decision in May 2019 to end 35 years in the English pyramid and return to the Welsh system, as the board felt it was the only way that the club could survive.

The Seagulls were accepted to the new JD Cymru North for the 2019/20 season and with the club putting a five-year plan in place, aimed at getting promotion to the Welsh Premier League and to challenge for European football, manager Craig Hogg signed a new five-year contract.

With Neil Coverley joining the board as Director of Football, Mark Orme was appointed as new assistant manager.