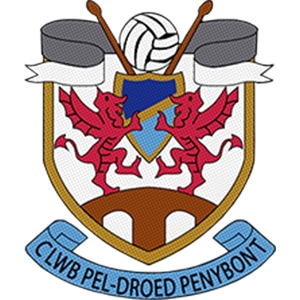 Penybont FC was formed in 2013 with the merger of the two premier clubs in the Bridgend County in the form of Bryntirion Athletic and Bridgend Town. The Directors of both clubs put aside their rivalries and decided for the good of football in the borough, that the clubs should unite as one and push forward together in their pursuit of the higher echelons of the Welsh football pyramid and also become a club with its community at its heart.

Emlyn Phillips was elected as the first ever Chairman of the new Penybont FC club, with his deputy being Colin Mawer. With seven other directors, this off the field team has the highest visions for the newly merged club and will continue to push Penybont FC forward in its thinking and playing values.

Francis Ford was the outstanding candidate to be Manager of the new club and with his experience of playing and managing in the Welsh League, coupled with his professional experience as a former Cardiff City player. Paul Wiseman was his assistant and Nigel Jordan as the First Team Coach. With players from the old Bridgend Town and Bryntirion Athletic clubs at his disposal, coupled with other new signings, the squad looked very strong for its journey as a club in The Welsh Football League.

Coupled with turning Penybont FC into one of the top clubs in Welsh Football, the Directors also wanted to make a bigger impact with the local community of the Bridgend County and decided a new 3G FIFA approved artificial pitch was to be installed on the old Bryntirion Park main pitch. This minimises the impact of the harsh weather during the winter and allow Penybont FC teams to continue to play their league matches and also be a place for other local teams of all sports to train and play through the winter. This is a fantastic aide to local community sports clubs and also the local schools who now have a top class facility on their doorstep.

The Club House was next on the agenda and again the Directors pulled out all the stops and have extended the Club House with a new ‘Sports Bar’ themed bar, which has allowed us to have a function room at the Club House. Already one the places to go in Bridgend, our Club House will become even more welcoming to all and we can host all types of parties for the local community. We have also refurbished the original clubhouse and changing rooms. The Club House has also become the home of Bryntirion Athletic Juniors and Bridgend Town Juniors and their achievements and news can be seen in the players’ tunnel from the changing rooms.

To tie in with our Youth policy at the club, we have two clubs to feed into the senior section of the Penybont Football Club pyramid in the form of Bridgend Town Juniors and Bryntirion Athletic Juniors. These two great junior clubs have supplied some fantastic talent in the past and present. We have also created a new partnership with Bridgend College and their top class sports department, which will provide excellent links to the College and also Penybont FC for its athletes. To tie in with this partnership we installed another 3G artificial surface at the College Campus to help their development process. We have also spent another £20,000 on the second pitch at Bryntirion Park because of drainage issues which will help Penybont FC’s teams as well as the young junior and mini teams who play on this pitch. This was brought about thanks to our excellent partnership with the local Laleston Community Council to which we are deeply indebted.

We renamed Bryntirion Park in 2015 to the KYMCO Stadium, also in 2015 our Reserve Team broke the Welsh League scoring record with a 25–1 win over West End. The Reserves also won their division in the 2014-15 season.

Towards the end of the 2015-16 season, Manager, Francis Ford advised of his intention to resign at the end of that season. This was the end of an era as Franny had managed Bridgend Town, Bryntirion Athletic and Penybont for over 10 years.

Prior to the commencement of the 2016-17 season, Welsh Premier League goal scoring legend Rhys Griffiths was appointed Penybont’s new Manager with Martyn Giles his Assistant. Despite a slow start, the team ended the season on a high with seven wins out of seven in April, with the Manager and Club winning the Manager’s and Club’s League Awards for the month, and the team ending the season in the runners-up position. At the end of season 2017-18 we finished in third position.

Helen Jones continues as the Club House Stewardess, and the clubhouse continues to shine and affords a warm welcome to customers old or new. Whilst our Chairman, Emlyn Phillips is as ambitious as ever and the driving force behind this thriving club and takes us forward into an exciting future.