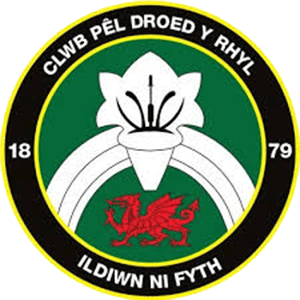 Football in Rhyl dates from the late 1870s and at one time there were several Rhyl clubs in existence. Rhyl F.C. became founder members of the Welsh League, formed in 1890, but withdrew the following year. They reformed as Rhyl Athletic in 1893 and became founder members of the North Wales Coast League, winning the title in 1894–95. Rhyl Athletic joined forces with Rhyl Town in 1898 and in an ambitious move switched to the Anglo-Welsh competition known as The Combination.

Despite financial crises, they remained in membership until the league disbanded at the end of the 1910–11 season. Under the name of Rhyl United, they rejoined the North Wales Coast League but, following the Great War, they moved to the North Wales Alliance, before becoming founder members of the Welsh National League (North) in 1921. Rhyl won the title in 1925–26 and became a limited company in 1928 as Rhyl Athletic. In 1929 Rhyl applied to join the Football League but York City became the only non-league team elected to the Third Division North.

With North Wales football in turmoil in the early 1930s, Rhyl sought to realise their ambitions elsewhere. Another unsuccessful application to the Football League was made in 1932 before joining the Birmingham and District League. Seeking relief from the onerous traveling to the Birmingham area, Rhyl successfully applied to join the Cheshire County League in 1936 and began one of the most successful chapters in the club’s history.

In a post-war purple patch, Rhyl won the league title twice – in 1947–48 and 1950–51 – and the Welsh Cup twice in succession. In 1952, they beat Merthyr Tydfil 4–3 and became the first non-league side in the modern era to retain the trophy, by defeating Chester City 2–1 the following season. Rhyl had been losing finalists to Cardiff City in 1930 and Crewe Alexandra in 1937 but did not feature in the final again until 1993 when they lost 5–0 to Cardiff City.

Between 1948 and 1972 Rhyl appeared regularly in the first round proper of the FA Cup. In 1957 Rhyl reached the fourth round proper, losing 3–0 away to Bristol City. In the Cheshire County League, success eluded them for several years before they won the title in 1972. On the dissolution of the Cheshire County League in 1982, Rhyl became members of the North West Counties League, winning promotion to the Northern Premier League in their first season.

In 1992, they reluctantly decided to join the League of Wales but, because their application was received too late, they were placed instead in the Cymru Alliance, the second level of the pyramid system. In 1993–94, they won the title by six points and gained promotion to the League of Wales.

Over the years, the club has produced players of the highest caliber more than once, including Graham Williams (West Bromwich Albion), Barry Horne (Everton), Andy Jones (Charlton Athletic), Andy Holden (Oldham Athletic), and most recently Lee Trundle (Bristol City) after seeing his career revitalised in his short spell with Rhyl in 2000–01.

For many years the club struggled in the top flight of Welsh football but, after being taken over by a consortium led by former player Peter Parry, a significant improvement in results saw Rhyl become one of the Welsh Premier League’s leading clubs.

In season 2003–04, the club won the Welsh Premier League, qualifying for the Champions League qualification rounds (though they lost 7–1 on aggregate, to Skonto Riga of Latvia in the first qualifying round), and were winners of the League Cup and Welsh Cup, although they lost the final of the FAW Premier Cup 4–1 to Wrexham. Rhyl completed a famous quadruple by rounding off the season with a 6–0 win against Halkyn United in the Final of the North Wales Coast Challenge Cup.

In 2005–06, Rhyl recorded their first-ever win in European competition when they defeated Lithuanian side FK Atlantas 2–1 in the home leg of the first qualifying round of the UEFA Cup. Rhyl lost the away leg 3–2, but progressed on the away goals rule, the first Welsh team to make the second qualifying round since Barry Town in 1996–97. They lost in the second round against Norwegian club Viking F.K., 3–1 on aggregate.

The Lilywhites claimed more silverware in the 2005–06 domestic season when they lifted the Welsh Cup, beating Bangor City 2–0 at the Racecourse Ground, and the North Wales Challenge Cup after a 2–1 win over Denbigh Town in the Final. A third-placed finish in the Welsh Premier League meant Rhyl would compete for a third year in a row in European Club competitions.

Rhyl’s 2006–07 European adventure in the UEFA Cup was ended at the first round with a 2–1 aggregate defeat by Lithuanian side FK Sūduva of Marijampole. Back in the UEFA Cup in 2007–08, Rhyl achieved a memorable 3–1 home win over FC Haka only to be eliminated on away goals after a 2–0 defeat in the second leg in Finland. The club participated in the 2008 Intertoto Cup but were defeated in the first round 9–3 on
aggregate by Bohemians of Ireland.

In 2009 Rhyl won the Welsh Premier League for the second time comfortably finishing ahead of nearest challengers Llanelli, beating many club records including most wins in a season and most successive league wins. Rhyl took part in the Champions League starting in the second qualifying round against Partizan of Serbia. However, their efforts proved futile as Rhyl fell to Partizan with an aggregate score of 12–0, including an 8–0 rout at the Stadion Partizana.

On 30 July 2009 Rhyl made an announcement that Allan Bickerstaff had left the club and defender Greg Strong was to become player/manager.

On 17 May 2010, it was announced that Rhyl’s Welsh Premier licence had been revoked. Their appeal was unsuccessful and they were relegated to the Cymru Alliance. The club finished Cymru Alliance runners-up to gap Connah’s Quay in 2010–11 and 2011–12. GAP secured promotion to the Welsh Premier League in 2012, having failed to obtain a domestic licence in 2011, leaving Rhyl as potential favourites for the title in 2012–13. From the terraces, Mike Jones was announced as the club’s new general manager.

Rhyl started the 2012–13 season magnificently, winning their first 8 games. On 6 May 2013, having won the league title on 20 April, Rhyl beat Cefn Druids 2–0, thereby becoming the first club to complete a Cymru Alliance season unbeaten. In winning 24 matches and drawing 6, Rhyl scored 100 goals and secured promotion back to the Welsh Premier League after an absence of three years.

On 20 August 2013 Rhyl announced a 3-year sponsorship deal with Corbett Sports which would see the Belle Vue stadium name changed to the Corbett Sports Stadium.

In May 2015 it was announced that manager Greg Strong had left the club by “mutual consent”.

Former player Gareth Owen was then appointed as manager, with Mark Roberts as his assistant but a disastrous run of form during which the club won only three matches in all competitions meant Owen and Roberts departed in February 2016. They were replaced by 24-year-old academy director Niall McGuinness, whose father Laurie, a former Rhyl coach, was appointed as assistant manager.

Rhyl avoided relegation at the end of the season when Port Talbot Town failed the domestic licence test but 12 months later an 11th place finish saw the Lilywhites relegated to the Huws Gray Alliance for the 2017/18 season.

Niall McGuinness resigned as Manager following the JD Welsh Cup Round 1 defeat away at Llandudno Albion and was replaced on an interim basis initially by Mark Connolly. Matthew Jones, formerly the 1st team coach was appointed as First Team Manager for the remainder of the season in January 2018.

On 21 April 2020, the club announced it was going to cease trading and be formally wound up after failing to find a £175,000 investment that would have saved the club. The club’s directors cited the financial impact of the COVID-19 pandemic as a reason for its demise, with no income to the club following the postponement of all football nationally. The former club’s league position under manager Eddie Maurice Jones at the time was at its lowest for the past 30 years.

In May 2020, two members of the old club, as well as members of the Rhyl Fan Association, formed a phoenix club taking Rhyl’s place in working in liaison with the RFA to ballot a new name which resulted in CPD Y Rhyl 1879. A few days later, the new club directors secured the use of the old club’s Belle Vue ground for the 2020–21 season, with an exclusive option to buy the ground as a whole for the new club.