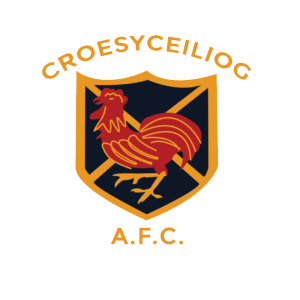 Croesyceiliog AFC is a football club playing in Croesyceiliog, Cwmbran, Wales. The team plays in the Ardal Leagues South East, tier 3 of the Welsh football pyramid. The club was formed in 1964 as a youth team for pupils of Croesyceiliog School after they reached an agreement with the school for the use of its sporting facilities. It later entered a senior team in the Newport and District Football League and reached the Welsh Football League for the first time in 2004.

The club was initially formed as a youth team and joined the under-18 division of the Newport and District Football League the same year and later merged with Cwmbran Wanderers. The team entered a team in the senior league for the first time the following season, joining Division 2B of the Newport and District League. For the 1967–68 season, the league launched the Premier Division, of which Croesyceiliog became a founder member.

The club won the First Division of the Gwent County League during the 2001–02 season but was not promoted. The team achieved the feat again two seasons later and was subsequently promoted to the Welsh Football League for the first time in the club’s history after finishing the campaign unbeaten. Croesyceiliog enjoyed early success in the Welsh Football League, winning consecutive promotions in its first two seasons to reach the First Division. The club suffered relegation to the Second Division in the 2008–09 season.

During the club’s history, four players have gone on to play professionally in the English Football League: Terry Cooper, Andy Dibble, Glyn Garner, and Christian Doidge.