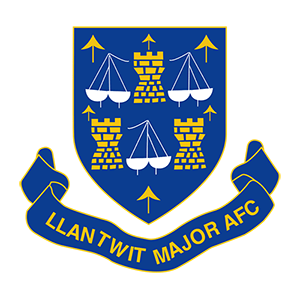 Llantwit Major Football Club was formed in 1962. A selection committee selected the team until entry to the South Wales Amateur League Second Division was gained in 1971. Life Member Gwyn John was appointed as the first team manager. Manager John’s team were promoted to the 1st Division after finishing second in the 1976–77 season.

Llantwit consolidated in the division before claiming their first Amateur League title under new manager Alan Foster in the 1979–80 season. This was closely followed by their second championship just a year later after retaining the title and adding the Corinthian Cup to achieve the double. This kick-started a golden period in the 80’s where the club won another double of league and Corinthian Cup in 1983–84. The hat-trick of Corinthian Cups came in the 1986–87 season. The club were also runners up in the league on a further two occasions during the decade.

The 1990s by contrast was a very mixed period for the club, first relegation in 1991–92 under Rob Sherman’s leadership, followed by promotion two years later with Steve Manning at the helm. Fast forward two years and relegation, this time with record appearance holder Pete Lingham as player/manager. However, the club made sure they were in the first division again at the turn of the millennium, the management duo of Kev Pycroft, and Phil Clay gaining promotion by winning a comfortable Second Division title.

The club spent the next decade consistently flirting with the league title without ever looking like serious title contenders with Llantwit stalwarts Tim Watts and John Guy providing much-needed stability in charge. The club also came runners up in the Corinthian Cup in 2005. John Guy stepped down as manager in 2010 following a decade as manager to move upstairs as Chairman. Guy did this selflessly in order to allow the introduction of fresh ideas into the club from new boss Kevin Rees in partnership with Watts. Rees and Watts introduced flesh blood into the playing staff gaining instant success by lifting the SWFA Senior Cup in 2010–11. The bedrock of the new players was Darren Robinson who became player/coach/manager along with the irrepressible Watts.

Llantwit Major has enjoyed incredible success in recent years, rising from the amateur divisions to the second tier of Welsh football. Manager Karl Lewis has established a strong squad of players from the local area, many of whom have been playing together for their entire lives. The most notable success so far was lifting the Welsh Football League Division Two title in the 2017/18 season, in the club’s first season at that level having been promoted from Division Three the season before. Former players Sam Snaith and Adam Roscrow have gone on to play in the Welsh Premier League with Cardiff Met, and the club also enjoyed a victory over Barry Town AFC – one of the biggest clubs in Wales. The Windmill Lane stadium has also seen improvements, with the addition of a new seating area and concrete standing areas, as well as improvements to the bar and clubhouse.

Following a 4 – 3 victory over Pontypridd Town, Karl Lewis announced he would leave the club at the end of the season. Darren Robinson was announced as his replacement shortly after.

For the 2019/20 season, Llantwit were inaugural members of the Cymru South. A number of improvements were made to the ground and pitch to be ready for the campaign, with the highlight being the addition of a new main stand.