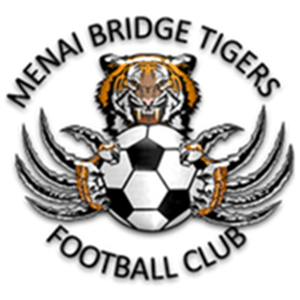 Menai Bridge Tigers FC were reformed in 2009 as a senior team and in that time they have come a long way. Their first three years were all about establishing themselves in the Anglesey League and putting a squad together. Season 2012/13 saw them win their first trophies where they won the Megan and Elias cups and lost in the final of the NWCFA Junior Cup.

Season 2013/14 saw them win the Anglesey league title which was a great achievement by the club and they also lifted two cups, successfully retained the Megan Cup, and were the first winners of the IPP Cup.

Season 2014/15 in their first season in the Gwynedd League they lifted the Meditel Cup by beating Llanllyfni 3 -1 in the final.

Season 2015/16 they finished joint 3rd in the League, lifted the Bob Owen Memorial Shield winning 1- 0 against CPD Waunfawr, and lost 2 – 0 to Y Felinheli (League Champions) in the Meditel Cup Final.

Over the last few seasons, they have created up a fantastic youth set up and the majority of the senior squad are local players and their philosophy will always be to promote from the junior set up into the first team.