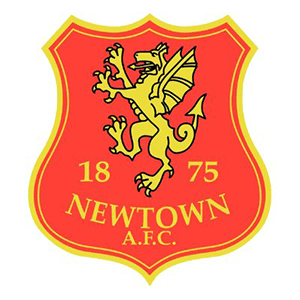 The club has a long and proud tradition with the move in the late 1980s into the Northern Premier League being part of the progressive nature of the club. Way back in 1877, Newtown AFC took part in the first-ever Welsh Cup tie on Saturday 13th October against Druids of Ruabon. Newi Cefn Druids now members of the Welsh Premier are derived from this club. Wrexham went on to win the competition but in the following season, Newtown Whitestars beat the favourites Wrexham 2-1 at Oswestry and in fact were the first club to receive the famous trophy which has only been purchased a few months earlier.

Over the years the club has played at a number of but the officers and general committee of the late 1940s took the decision to purchase and construct a new playing headquarters at a site to be called ‘LATHAM PARK’. This decision was a farsighted one, and the present board officers, committee, supporters and players owe much to their counterparts of some 60 years ago. During the past seasons, many ground improvements have been made. The Control Techniques stand has 420 covered seats with dressing rooms for the club and the community use. A further stand has been constructed at the Llanidloes Road end of the ground and the old stand has been improved with new seating as well as new ‘dugout’ facilities. The ground is named Latham Park to honour a local sporting hero Captain George LATHAM who played for Liverpool, Stoke City and Cardiff City being capped twelve times for Wales at the start of the century. He joined Cardiff as a player in 1911 and played a major role in the development of the club and their entry into the Football League. He later became the Cardiff City trainer and held this position when Cardiff had their historic F.A. Cup victory over Arsenal in 1926/27.

During 2004/05, the clubhouse was extended with the building of a new function room with a 200 capacity. This coupled with the upgrading of floodlights and a new pitch draining system resulted in a ground and social facility the equal of any in non-league football. The most recent addition in Oct 2009 was a magnificent media room with a balcony which also acts as an exclusive sponsors lounge on club match days. In early 2004, the club was awarded the prestigious UEFA Licence being the first Welsh Premier club to receive this major award. During the last 11 years, the club has hosted not only our own UEFA cup ties against Skonta Riga (1996) and Wisla Krakow (1998 but a host of other games including U21 Internationals, full ladies Internationals, Champion League and UEFA ties for other Welsh Premier Clubs as well as full U15 and U18 Internationals. The Welsh Cup final has been hosted on two occasions at the ground

Darren Ryan continued as first-team manager during the 2009/2010 season as the club battled to stay in the league under its new structure for 2010/1011. Newtown finished outside the top 12 but was given an 11th-hour reprieve when Rhyl failed to gain their Domestic Licence and their place was awarded to the Latham Park club.

Manager Ryan and his assistant Rhys Stephens both resigned a week ahead of the new season and the club moved swiftly to tempt former The New Saints Manager Dr Andy Cale out of retirement to take the reins. Cale named former Bangor City and Colwyn Bay Manager Lee Williams as his assistant and was introduced to his squad before kick-off against Northwich Victoria just a week before the new season kicked off.

After being near the bottom of the league, the Robins finished on a great run to secure 9th position but Cale and Williams resigned to leave Newtown to welcome former Northern Ireland International and ex-West Brom and Shrewsbury player Bernie McNally as its new boss with Academy Director Pete Carter stepping up as his assistant. After a difficult season, the club finished bottom but reached the final of the Loosemores Cup losing to Afan Lido on penalties but financial problems at Neath saw the Robins survive again to keep their place within the top tear of Welsh Football. McNally’s second season in charge saw a much-improved performance finishing in 9th position.

Bernard McNally started the season as manager of the first team with Lee Stephens manager of the reserves. But when Shrewsbury Town came calling for McNally, he left to become head of youth for the Shrews. His replacement was named as Chris Hughes, assistant manager of Prestatyn Town.

Hughes led his side into the league’s Europa League play-offs going down to Bangor City 1-0, however, in his second full season, he delivered success.

The Robins lost 2-0 to The New Saints in the Welsh Cup Final at a packed out Latham Park, before two weeks later securing a place in the Europa League and Mid Wales footballing history by leading Newtown AFC into Europe for the first time in 17 years, beating Aberystwyth Town in the play-off final.

In addition, the club runs a number of Junior teams ranging from U8’s to U19’s. The Junior section of the club is known as Newtown Whitestars managed by Junior Development officer Nicky Morris and the club also runs a ladies team and Ladies Academy.