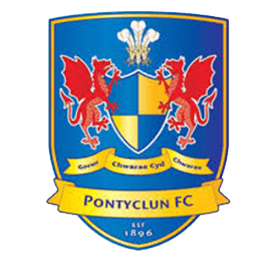 Pontyclun Football Club has been part of the South Wales football scene for over a century having been founded in 1896. It is not certain where the Club played its earliest home games – it may have been at Talygarn – but there is documentary evidence that Ivor Park became our home ground in 1920 when Wyndam Damer Clark, formerly of Talygarn House, gave the Club preferential use of the land as a football field.

A former member and secretary of the Club in the 1920s and 1930s, Thomas Edward Russell, was an influential administrator in Welsh soccer when he became Secretary of the South Wales Football Association (1936-1960) and later President of the Football Association of Wales (1967 to 1972). He also had a part in the FAW adopting the motto of Pontyclun Football Club on the national badge – “Gorau Chwarae Cyd Chwarae” (Best Play is Team Play). This appeared on a welsh jersey in 1951 during the FAWs anniversary celebration against a Great Britian XI and remains to this day. A former Welsh international, Keith Pontin, had his first taste of football as a junior at the Club and also made a contribution at senior level when he played out his “twilight” years at Ivor Park.

In the early years, the Club was a member of the Bridgend and District League but immediately after the First World War joined the Cardiff and District League. In 1922 the Club was admitted to the Football Association of Wales, one of the few amateur clubs to achieve such status. In 1968 the Club was admitted to the Welsh Football League, then the premier league in Wales, and long before the introduction of the “pyramid system”. At the same time, the Club continued to run senior teams in both the Rhondda and Pontypridd Leagues and junior teams in the Rhondda League.

In 1968, the composition of the Welsh Football League was much different from that of today. Some 54 teams competed in three divisions and the “Premier League” included the reserve teams of Cardiff City, Swansea Town, and Newport County. Of the 54 teams who competed in the league throughout that season, only 14 now remain which is a reflection of the changing fortunes and level of support of grassroots football in Wales and the introduction of the Welsh Pyramid system. It also reflects the achievement of the Club and its amateur status over some 44 years.

The Club had a respectable first season in the Welsh League being undefeated in 16 of its 34 league fixtures. In subsequent seasons the Club played most of its matches in the lowest division but achieved promotion three times. In season 1979/80 the Club was runner up to Lake United and again in season 1992/93 to Treowen. However, the proudest moment in the Club’s long history came at the end of season 2002/03 when on an emotional May afternoon the Club won the Division 3 title, pipping the Skewen Athletic by the slimmest of goal differences (plus one). In the same season, the Reserve team were runners up in the Welsh League Reserve East Division.

The end of season 2012/12 was one of great disappointment to all those associated with the Club when we finished at the foot of Division 3 and relegation from the Welsh Football League after 44 consecutive seasons. However, the strength and support within the Club and from the local community was demonstrated off the field with the progress made on the development of the new changing facility, one of the finest in the area now it has been completed.

Season 2012/13 saw a number of clubs visiting Ivor Park for the first time with the Club playing its first-ever season in the Amateur League. The club returned to the Welsh League following a superb season in 2016/17 by winning the South Wales Alliance League. A difficult league to win with only the Champions being promoted the club had a fantastic season with a great squad built on a great defensive record.

The Club has reason to look forward to the future with much optimism – the changing facility is now complete, junior football is thriving and we have a number of homegrown talented youngsters breaking through at senior level.