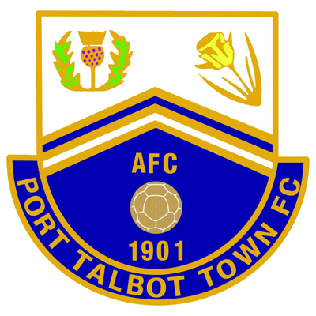 Early Days
Formed initially in 1901, Port Talbot spent their early years playing in the Swansea Senior League – starting at the bottom end of the Welsh pyramid.

Early records show that one of the club’s biggest wins came in 1909-10 when they beat Llanelli 10-0. After the First World War, it is assumed that the club again played in the Swansea League until 1926, when they became founder members of the Port Talbot and District Association Football League.

In the 1928-29 season, a team sporting the name Seaside Athletic were competing in the Welsh League Division 2 Western Section, and sources say this was the same club that formed in 1901.

Port Talbot continued to ply their trade in the Second Division until 1956-57 when they won promotion to the top flight. They were never comfortable, and it was no surprise when they were relegated after just one season.

After a rebuilding programme, they were soon back in action in the first division after becoming champions of Division 2 West at the end of 1961-62. However, once again they suffered relegation just twelve months later.

Season 1964-65 saw the re-organisation of the league, and Port Talbot found themselves in the new Division One. However, relegation to the second division came in 1970/71, a major setback for the club.

A long hard slog in the lower echelons ended in 1982-83 when they finished as runners up to Tondu Robins, and won promotion to the first division. Port Talbot were included in the prestigious new National Division of the Welsh League in 1984-85 and stayed there until 1990-91 when they were relegated after a lamentable season.

The club missed out on a place in the inaugural League of Wales, and worse was to follow when they were relegated to the present Division 2 in 1993-94. Better times arrived under the leadership of Steve Llewellyn and Alan Meacham, and the club won back their place in the top division with a last day promotion at local rivals Goytre United in 1995-96.

After a period of consolidation, they finished 5th in 1997-98 under David Rees and Craig Duggan during their first season in the managerial hot seat.

Since then, the club has been transformed off the field, with Andrew Edwards taking over as Chairman at the start of the 1998-99 season. At this point, a three-year master plan was put into operation, which included taking the club to the League of Wales by its centenary year in 2001-02 and establishing a youth/junior system from under-7s right up through to under-18s.

Promotion to the League of Wales
The success of the 1999-2000 season saw the club promoted to the League of Wales a year ahead of schedule and the introduction of two junior teams and a youth team in the MacWhirter Youth League. Many improvements were carried out to the Victoria Road Ground with refurbished dressing rooms, a new 260- seater stand, floodlights, television camera gantry, turnstiles and a hard standing around the pitch.

The club made a satisfactory start in the League of Wales gaining six victories before Christmas 2000. Unfortunately, some of the work was undone by a disappointing end to the campaign. Nevertheless, in Kevin Bartley, they had the league’s third top goal-scorer, his tally of 23 including successive hat-tricks at Connah’s Quay and Rhyl.

To mark their centenary year, the club’s title was changed from Port Talbot Athletic to Port Talbot Town at the start of the 2001-2002 season. The club reached the semi-finals of the Welsh Cup in 2003-4 for the first time in their history, but hopes of a foray into Europe were dashed in a 1-0 defeat by TNS at Park Avenue.

Following the departure of manager Mark Jones to Carmarthen, the Steelmen found it difficult to replicate their success in 2004-5 and spent much of the season battling relegation, although they eventually finished a relatively comfortable 13th under manager Wayne Davies.

During the season, chairman Edwards proposed a merger with local rivals Afan Lido, who play less than a mile away from Talbot’s Victoria Road ground, in the belief that it would produce a stronger and more commercially viable club for the town. But Lido rejected the move, despite some senior officials being in favour.

Off the field the club have continued to progress as much as they have on the field, the Victoria Road ground has been renamed The RE/MAX Stadium following a major sponsorship deal and the seating capacity has been boosted to 1,000 with the construction of the 750 seater Gerald McCreesh Stand.

Hospitality facilities have been improved with the building of the Gerald McCreesh Suite overlooking the ground while the heavy investment into the playing surface has made it one of the best grounds in the Welsh Premier League.

On the field manager Wayne Davies stepped down from his position at the end of the 2006-007 season but claimed a memorable scalp in defeating Swansea City in the FAW Premier Cup while also taking the club to another Welsh Cup semi-final and also the Challenge Cup Final. Tony Pennock was appointed manager for 2007-2008 as the club look to further build on their continued successes but an unsuccessful start to his managerial career saw the former Newport County and Yeovil Town goalkeeper resign in November.

Nicky Tucker was appointed to replace Pennock after impressing at Welsh League side Dinas Powys and made an immediate impact on the side as Port Talbot claimed a fourth-place finish in the 2007-2008 Principality Welsh Premier League. Off the field, the club made further improvements with the formation of a new Board of Directors together with a three-year stadium sponsorship deal with local company GenQuip to further consolidate their place as one of the leading clubs in the league.

In December 2008 Mark Jones was re-appointed as manager to replace Nicky Tucker who was sacked after a disappointing start to the season and quickly turned-around the clubs fortunes by achieving a fifth-place finish despite the side being in the bottom half of the table on his arrival.

Welsh Cup final and Europa League qualification
Jones has been busy in the transfer market ahead of the 2009-2010 season bringing in six new players while off the field the club continues to expand its commercial ventures to sustain its place in the domestic top-flight ahead of the reduction of the Welsh Premier League in 2010-2011.

A superb season in 2009-2010 saw the club qualify for the UEFA Europa League for the first time with a 3rd place finish. Playing Finnish outfit FC Turku over two legs.

The club also reached the Welsh Cup Final for the first time but narrowly lost 3-2 to Bangor City at Parc-y-Scarlets.

Off the field, the club once again earned both the FAW Domestic Licence and the UEFA Licence to confirm their place in the reduced Principality Welsh Premier League and also their place in Europe.

There was additional success for the club’s academy as the Under-16 side lifted the FAW Academy Cup which was a fitting reward for the years of hard work from the clubs junior section.

New League format
2010-11 would become a significant year in the development of the Welsh Premier League after its clubs had unanimously decided to reduce the league to 12 clubs and to introduce a new playoff format.

The new format would bring little joy to Port Talbot, however, who despite making the top-six cut by a single point in January, were eliminated in their first playoff game away to Prestatyn Town, after seeing a one-goal lead slip away, conceding twice in the final ten minutes.

A distinctly average season in the newly-named Corbett Sports Welsh Premier League would follow in 2011-12, as the Port Talbot failed to reach the top-six and missed out on the play-offs altogether, in a season typified by a dismal exit in the Welsh Cup third round to rivals Afan Lido.

A busy off-season for the club saw a host of new signings arrive at the GenQuip Stadium – including the high-profile arrival of Rhys Griffiths. His unexpected signing was cut just short just a few weeks later however when he was offered professional terms with League Two outfit, Plymouth Argyle.

When the 2012-13 season finally kicked off, it brought with it an uninspiring start and by December, the decision was taken to end manager Mark Jones’ four-year tenure at the club.

An influx of new players and a mini exodus – to Australia – saw Young virtually rebuild the team mid-season and the side – inspired by the goals of David Brooks – flourished in the second half of the season, comfortably securing a top-six finish.

A play-off semi-final victory over Carmarthen Town put Port Talbot within grasp of qualifying for Europe, with home advantage in the play-off final against Bala Town. But a bumper crowd at the GenQuip Stadium were left heart-broken when a late goal saw Bala victorious and Port Talbot empty-handed.

Return to the Welsh Football Leagues
The 2015-2016 Welsh Premier League season saw Andy Dyer’s Blues make it to the semi-final stage of the Welsh Cup, bowing out to Airbus with a 7-0 drubbing.

Just weeks later, the club was relegated from the Welsh Premier League, despite finishing above the relegation places – with a 10th placed finish. The club had been refused a FAW Domestic License on financial grounds, the club appealed but it was rejected.

The club then underwent a major overhaul of its internal structure, with a new chairman, vice-chairman, secretary and treasurer being appointed, and a committee consisting of staff and fans alike being formed. The wage bill for the 2016-2017 was cut massively in order to keep the club sustainable going forward, with the club looking to Academy and proven Welsh League players to play in the first-team.

Current first team manager Mark Pike assembled a squad of local players in his first full season in charge at the football club and despite working with a playing budget that was the lowest at the club in near two decades, relegation was avoided in the 2018-19 season. It was a case of déjà vu though as the club was demoted to tier 3 of the pyramid due to licencing reasons.

Despite a second demotion in recent years and a further change of personnel behind the scenes, the football club continues to operate under a sustainable model with the aim of footballing success to be delivered back to Victoria Road in years to come.