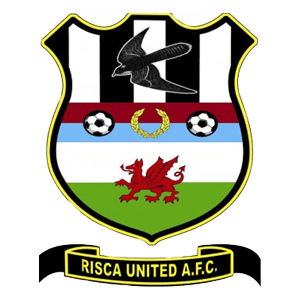 Risca United came into being in 1946 when a few local sides UNITED to form the new club, they played at Ty-Isaf Park in the Monmouthshire Senior League, where after early success they joined the Welsh Football League in the 1951/52 season playing in the 2nd Division East until 1961 before having to drop back into County Football due to financial reasons. Their highest position during those 10 years was 5th. in the 2nd Division East.

The club have always been known as “The Cuckoos”, in keeping with the legend of the Risca Cuckoo.

In the summer of 1965, the club almost folded due to a lack of funds/committee members but were ”taken over” at the 11th. hour by Fernlea A.F.C., a Risca based, Newport & District League side, who actually shared Ty-Isaf Park with “The Cuckoos”. For a few seasons, the “new” club struggled in the lower reaches of Division One of the Monmouthshire Senior League but always managed to avoid relegation. Gradually we strengthened on and off the field before Risca United began its “Golden Era” in the early ’70s.

During that decade “The Cuckoos” strung together an incredible 13 honours including 3 consecutive League and Cup doubles, 3 Championships, and were Challenge Cup Winners for 5 consecutive seasons. The 3 consecutive League & Cup doubles had never been achieved previously and was recognized by the Monmouthshire Senior League in
presenting the club with a one-off trophy that still proudly sits in our trophy cabinet.

Following these achievements, the club strived to fulfil its motto, “Progress” and eventually accepted back into the Welsh Football League in 1990/91. They were Division 3 runners-up in that first season and then spent three seasons in the 2nd. Division before gaining promotion in 1994/95 to the Welsh League 1st. Division. The club had two seasons in
the top flight of the League before slipping back down through the divisions. Their highest placing in Division 1 being 11th in 1995/96.

In 1995 The Cuckoos reached the 4th round of the Welsh Cup and played at Ninian Park against a full-strength Cardiff City in front of 1,200 spectators, for an hour the score remained 0-0 but eventually, the “Bluebirds” ran out 4-0 winners.

In 2001 the club took part in a two hour BBC Wales TV football drama, “Score”. Filming lasted a week at Ty-Isaf Park were some TV stars, including, Sue Johnston (Brookside & The Royale Family), Eve Tyler (Belonging & Torchwood) rubbed shoulders with “The Cuckoos”. Some of the clubs players even took part in filming at Elland Road in front of 40,000 Leeds United fans!

In 2003/2004 Risca United were again in the limelight as BBC Wales filmed their historic 2-1 defeat of Barry Town at Jenner Park in the Welsh Cup, at the time Barry Town were the Welsh Cup Holders and reigning Champions of the Welsh Premier League.

The “Cuckoos” are an ambitious club and are one of the few clubs in the Welsh Football League that actually lease their ground, being nine years into a 20-year lease from Caerphilly County Borough Council. Under the guidance of Player/Manager Paul Michael a 3rd. place finish in 2013/14 secured promotion to the 2nd. Division after a spell of 13 seasons in the 3rd. Division. That was followed in 2014/15 with a second successive promotion when 3rd. place in Division 2 was achieved on the last day of the season with a 5-1 defeat of A.F.C. Llwydcoed, the last game in an incredible 13 match unbeaten run.

In 2014/15 the club set up an Academy for young players between 10 and 16 years and straight away were granted F.A.W. Accredited Academy status. That first year was a huge success at all age levels but pride of place went to our under 12`s who completed their F.A.W. Academy League (South) Fixtures unbeaten and finished top. In the All Wales Play-Off Final held at Latham Park, Newtown we beat Bala Town 5-1 to become Welsh Champions in our very first season. The Academy augers well for the clubs future.

Risca United in one way, have become victims of their own success, the consecutive promotions in 2013/14 and 2014/15 saw “The Cuckoos” back in the top flight of the Welsh Football League after 18 years but with the F.A.W. determined that all clubs in the 1st Division have grounds that qualify for a Tier Two Licence by the end of 2018 it meant that we had to move from our humble surroundings in Risca to the new Council owned, Centre for Sporting Excellence (The C.S.E. Stadium) at Ystrad Mynach. It meant that 1st Division/Welsh Premier Development/Academy games would be played there whilst the club’s other sides would continue to use Ty-Isaf Park in Risca.

Following our move to the C.S.E. Stadium we applied for and were accepted into the strongest domestic youth league in Wales, The Welsh Premier Development League (South) were our Under 19`s compete against established giants including, Merthyr Town, Barry Town United, Cardiff Met. Uni., Llanelli Town, Aberystwyth Town, Penybont etc.

Season 2018/19 saw us finish in our highest position to date, 5th. Playing at this level of football, on very good grass and 3G pitches has ensured our young players are capable of making the step up to senior Welsh League football, last season 6 or 7 made their first-team debuts. The pitch at Ystrad Mynach is a synthetic 3G standard with facilities second to none.

The club finished the 2015/16 season in it`s highest ever Welsh League position after a difficult start finishing 10th to ensure a second season in the top flight. We knew it would be tough against established clubs at that level and after early success in 2016/17 when we were actually top after five unbeaten games, the bubble burst, we went on a losing streak and by November 2016 were struggling, worse was to follow as young Player/Manager of six years, Paul Michael left to become Cinderford Town Manager in the English Southern League.

Paul`s number two Simon Berry took over the reins but his tremendous efforts failed to get us out of trouble as too many players either followed Paul Michael to Cinderford Town or left for other Welsh League clubs. There was no way out and we were duly relegated back to the second division in May 2017. “Bezzo” remains in charge as we attempt to regain top-flight status, he worked hard during the summers of 2017 & 2018 to bring in new faces to supplement our young side but we have found it difficult to achieve the consistency required over a 30 game season.

Season 2018/19 became a real struggle following a very poor start and saw us finish just above the relegation trap door but despite a poor season we still managed to perform well against two promoted clubs, beating STM Sports away and Caerau Ely at home but our lack of consistency also saw us beaten by a couple of relegated sides.

We’ll continue to play at the C.S.E. Stadium in 2019/20, believing that any ambitious, talented, young players in South East Wales will want to test their ability and to showcase their football at a state of the art facility. “Bezzo” will no doubt continue to work hard in the summer in an effort to recruit good enough players to ensure that we have a better season in 2019/20.