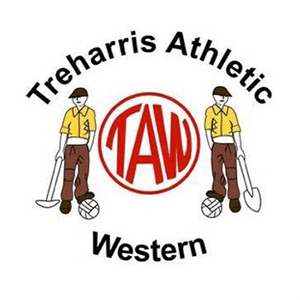 The original Treharris club was formed in 1889 as one of the earliest association football clubs based in South Wales and founding members of the South Wales League – a predecessor of the Welsh Football League – in 1890. The Treharris club was one of the foremost association football sides in south Wales in the two decades before the First World War, winning the inaugural South Wales League title in 1891, adding further triumphs in 1905 and 1906. They were also winners of the South Wales Senior Cup in 1904, 1906, 1907, and 1911.

After organised football resumed in 1919, the club was resumed as Treharris Athletic but did not join the English football pyramid, instead opting to play only in the Welsh Football League, where they generally played in the second tier during the 1920s and 1930s until the Second World War put an end to organised football for six years. When the Welsh League resumed in 1945, Treharris Athletic joined and have enjoyed uninterrupted membership since.

The home of football in Treharris since 1900 had been The Athletic Ground. However, the ground was condemned in 2016 and for two seasons Treharris were forced to play at different grounds including the Centre for Sporting Excellence in Ystrad Mynach and the Welfare Ground in Fochriw. At the start of the 2018/19 season, Treharris moved into their new permanent home on the former ground of the now-defunct Trelewis Welfare Football Club in Parc Taf Bargoed on the site of the former Deep Navigation Colliery.

The football ground at Parc Taf Bargoed has been redeveloped and now boasts a covered stand with 100 seats, floodlights, and a modern changing room facility which includes a communal space for serving hot food and drinks on matchdays.