The Globe Way Recreation Ground and Pavillion is better known as The Globe and is a purpose-built football stadium built with the assistance of Buckley Town Council and the Alyn & Deeside Leisure Service. It sits within the Etna Country Park between Etna Road, Globe Way and the Spencer Industrial Estate. Sitting on a bank in front of the Etna Park it has views over the Dee Estuary to the Wirral, Liverpool and beyond. 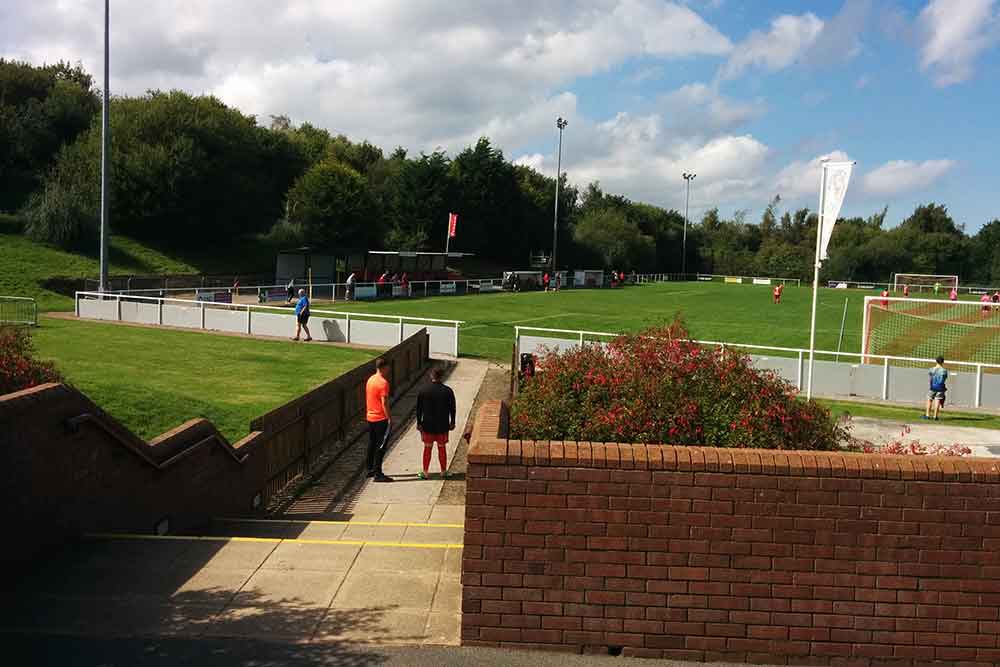 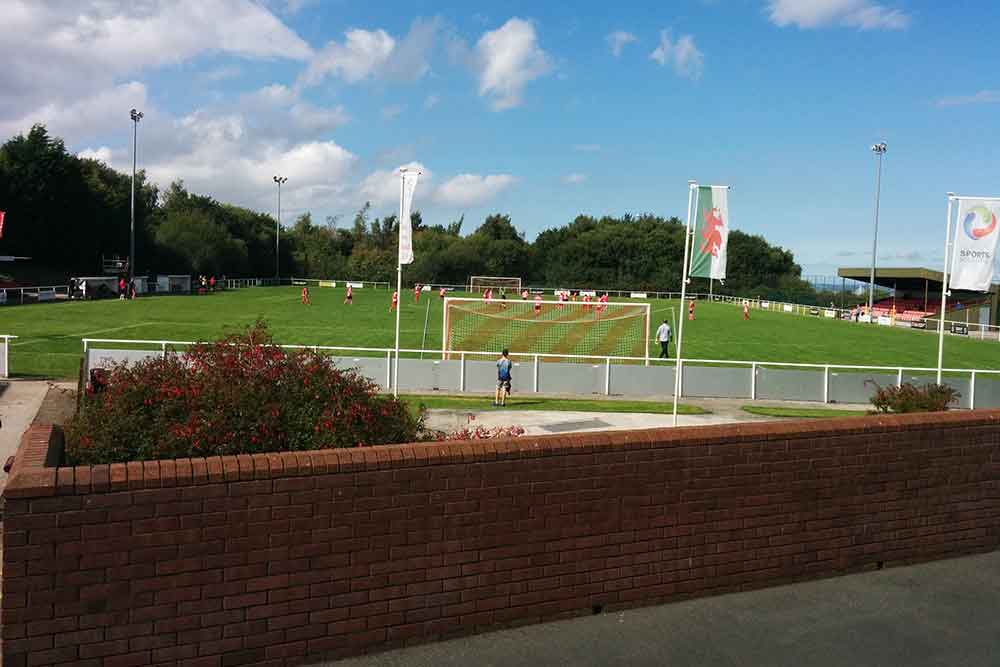 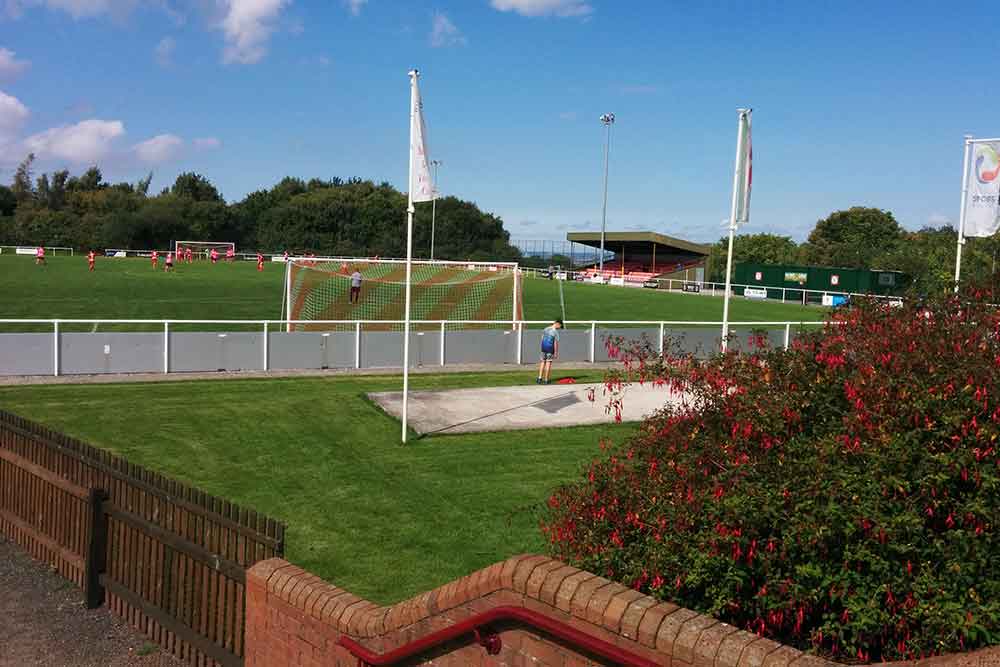 It was officially opened by Councillor W. A Jones J.P. the Chairman of Flintshire County Council on Saturday 12th September 1998 and the first game played there was a Welsh National League game between Buckley Reserves and Gresford Athletic Reserves on the 22nd August 1998 with Buckley coming out on top in a 3-1 victory. The honour of scoring the first-ever goal at The Globe went to Anthony Hinchcliffe.

A newspaper article from the Chester Chronicle written by Julian Weldrick titled, “PITCH HUNT HOTTING UP | Soccer players in Buckley have moved a step nearer their goal of finding new pitches in their home town” documented how the ground came into being.

The article states, “Some months ago, an action committee was set up by Buckley & Bistre Junior Football Club, who run several teams and have more than a hundred youngsters on their books.

Because of the shortage of pitches in their home town, several of the senior and junior sides have traveled to Deeside for ‘home’ games, or play on below standard pitches.

However, the clubs’ plight has now been taken up by Alyn & Deeside Leisure Service officials and councilors, and a meeting has been called for next Tuesday, at Buckley Town Council offices.

And the call for a meeting has been warmly welcomed by Malcolm and the action committee.

“Considering the vandalism in Buckley recently, it is essential youngsters and teenagers have facilities to keep them usefully occupied.”

“We feel the Etna Tip site would be suitable and hope moves towards getting the problem sorted out can be made at next week’s meeting.”

“Ideally, the meeting will look at both the long and short-term means of helping out soccer teams in the area,” he added.

Malcolm has been backed in the campaign by Stan Jones and Tommy Laughton and Bistre’s secretary, Norma King.

One of the senior clubs attending the meeting included Deeside Sunday League first division side Hope & Anchor, who have to play all ‘home’ matches at Sealand Manor, in Garden City.

Other clubs invited to the meeting are Sunday League third division club Nant Inn, along with third division Leeswood side Prince of Wales, who formerly used a Buckley pitch.

Malcolm Dinsdale, who is seen in the photo below of the meeting, is still involved at Buckley Town FC as a volunteer and a groundsman on the pitch he helped bring into being. 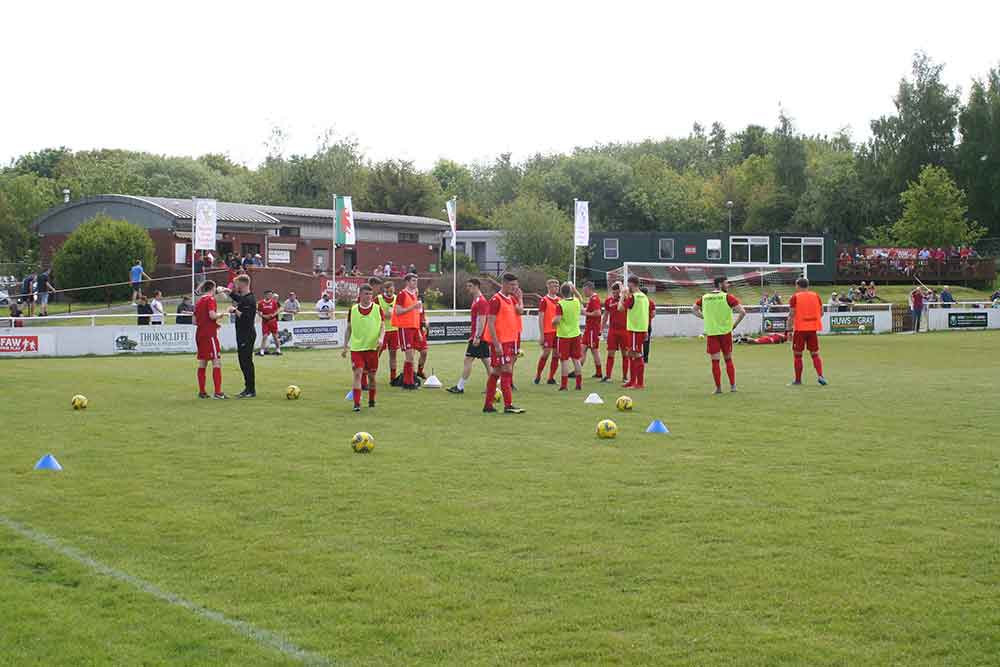 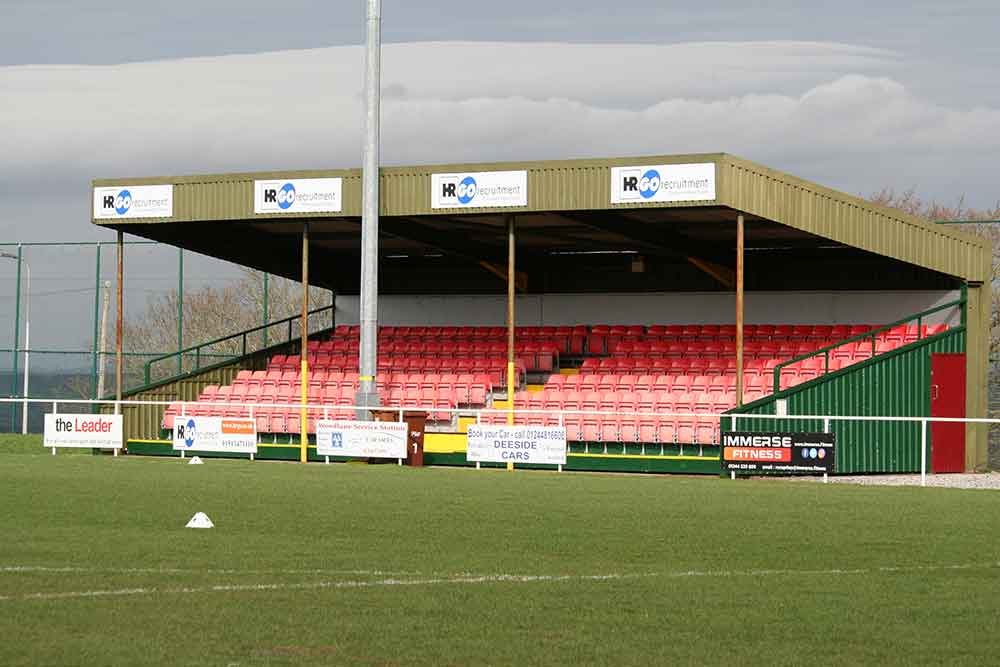 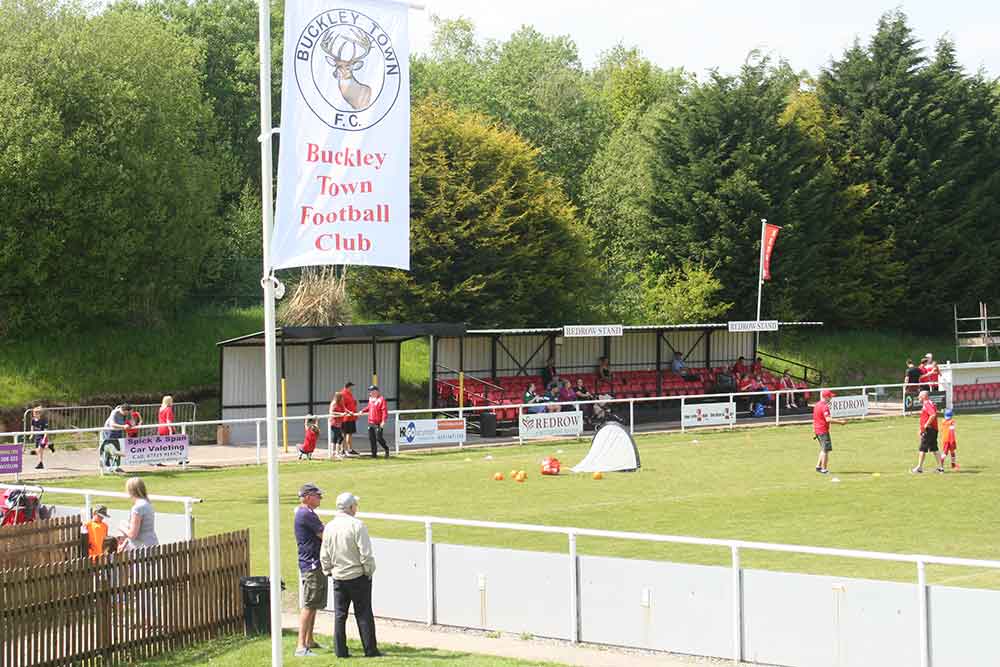 From the A55, you join the A494 and come off at the Ewloe exit. Then head for Buckley on the B5127 (Liverpool Road), stay on it until you pass the Shell Garage / Ewloe Hall Motors on the right. Take the next left into Globe Way. Pass the two large houses on your right, travel about 400 yards and the Ground is just on the right-hand side – lookout for the green fencing and the floodlights.

On match days the club Car Park is reserved for players, officials and club staff. There is ample parking along Globe Way on the roadside outside the ground. Simply park up and walk the short distance to the ground entering via the turnstile block on your right as you enter the ground.

The club serves the typical football club fare of Bacon or Sausage Baps, Cheeseburgers, tea, coffee, cold drinks, Oxo, Cup-a-Soup, crisps, and chocolate are all served by the friendly staff who will make sure that you have all the food and drink you need on those cold winter days. We also have a small bar and sun deck overviewing the ground serving a range of beers on match days.

Ladies, Gents and disabled access toilets are situated in the Pavilion or within the Toilet Block next to the Club House. 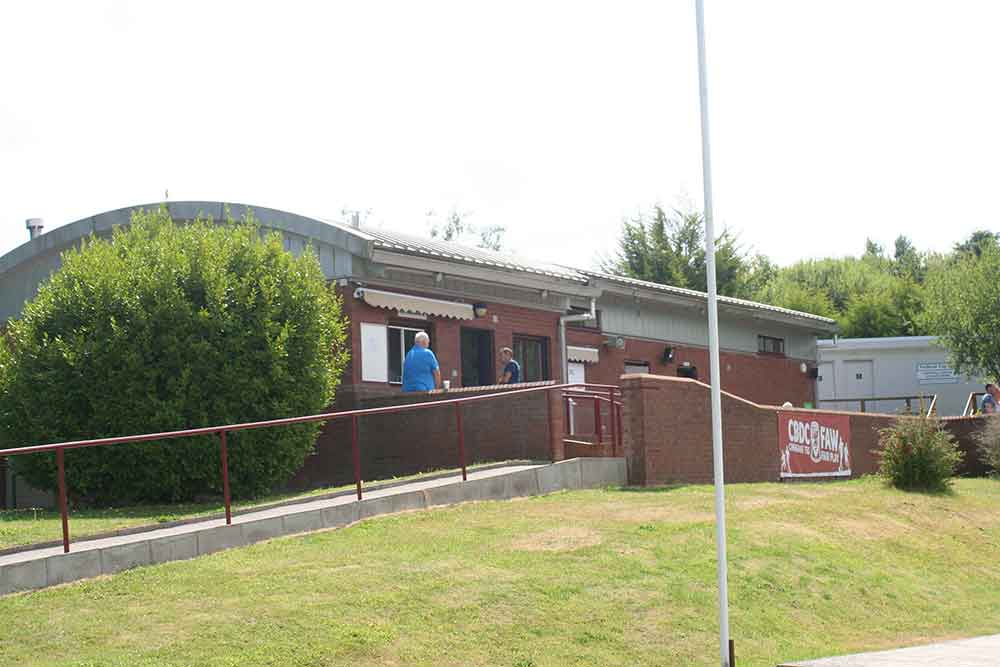 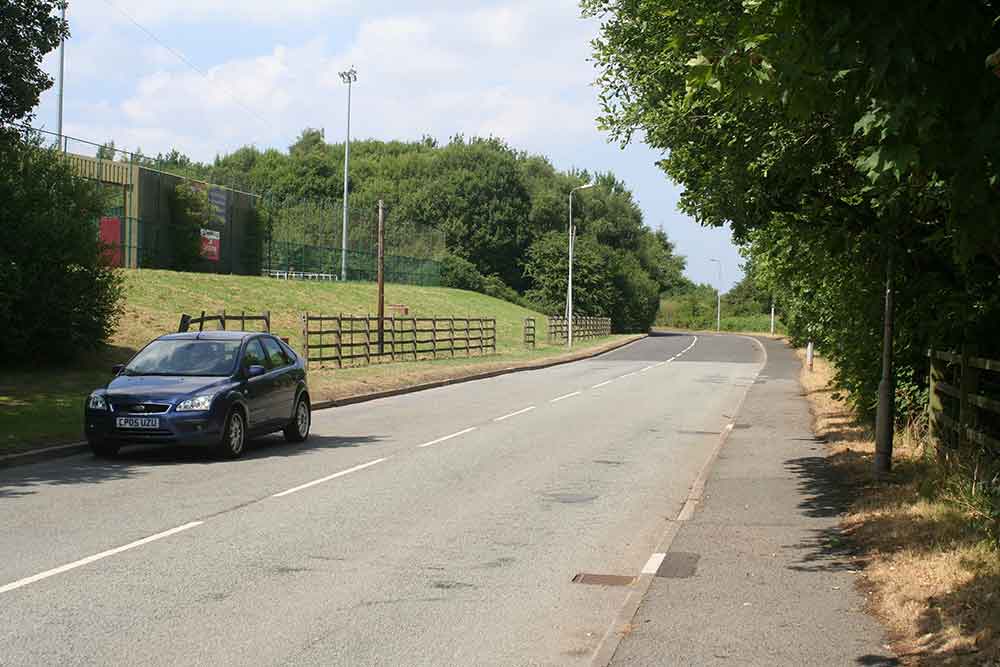 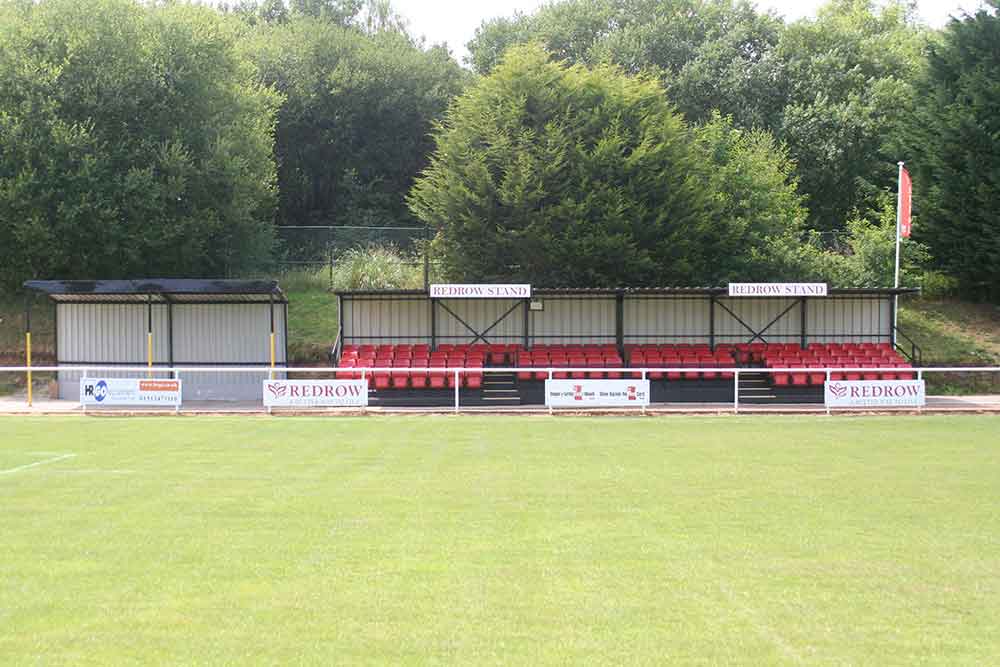