Some description text for this item

Football in Buckley has a long history going back to around 1860 with many clubs playing in different leagues, much different to that we know today. It was not until 1977 with the amalgamation of Rovers and Wanderers that the club we know today came into being, firstly, as Buckley FC and then adopting Buckley Town FC from the 1990-91 season onwards. 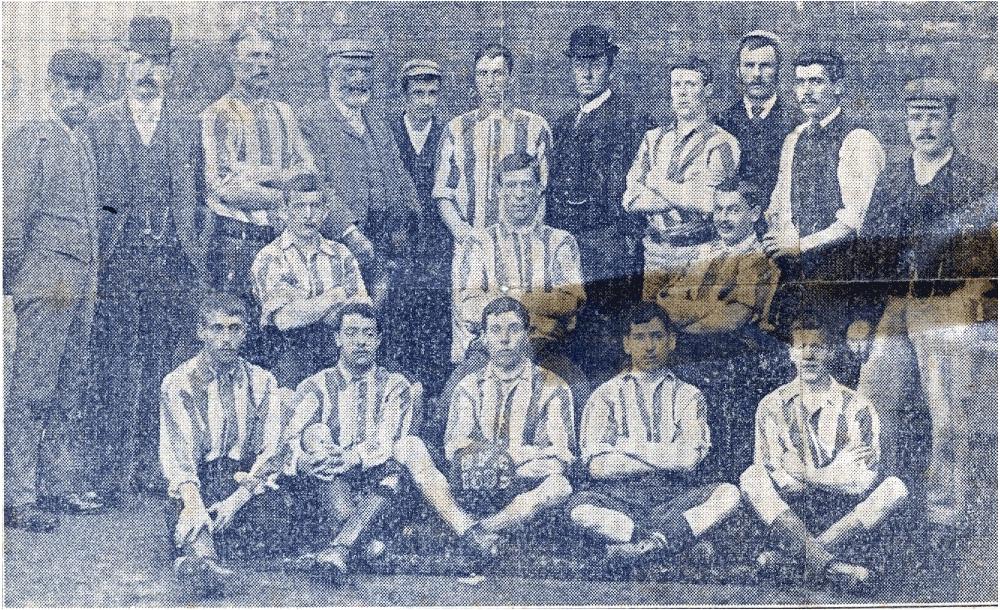 History shows that Buckley was an old established football center of North Wales. The game was first introduced in Buckley in around 1860. There were very few organisations, and lack of funds meant that the game was played in a basic way. An early player named Sarbat recalls playing football with his friends on the common in Buckley, using coats for goalposts, because the Lord of the Manor had forbidden the use of permanent wooden posts on the land. He recalls the day when he and his friends were presented with a real, full-sized, brand new football, from a vicar in the area. With the new ball, they regarded themselves as a real team, and established themselves as a football club, playing under the name of Belmont Swifts Football Club. This formed the heart of what would later become Buckley Victoria Football Club, the first organsised team in the town. 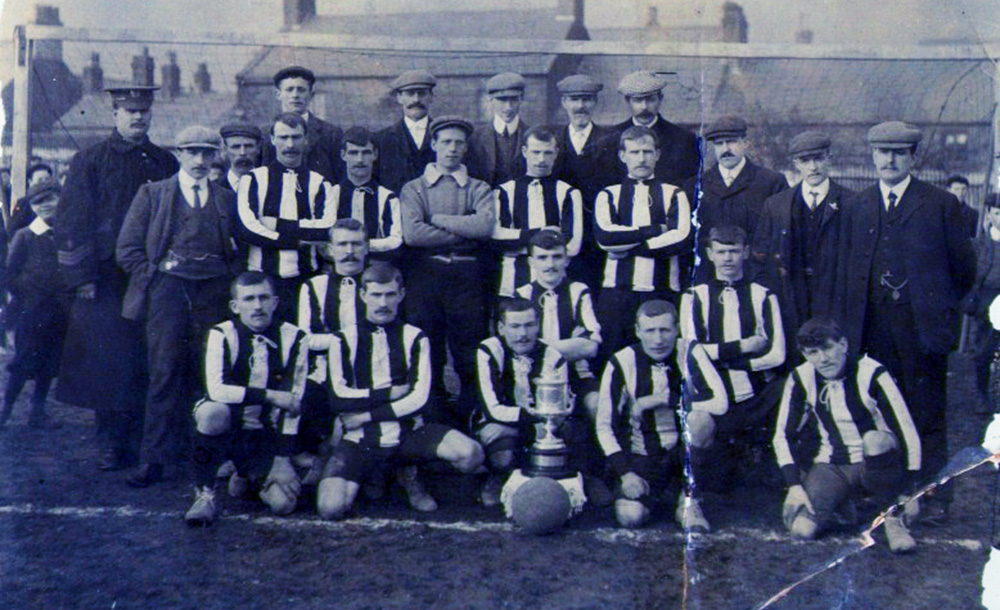 Buckley Victoria was superseded by the Buckley Engineers, who carried on the ‘Vics’ winning ways. The amateurs’ most famous team consisted of ten colliers and a plumber. They picked up a huge amount of silverware in their playing days, including the Welsh Amateur Cup which they won on 3 occasions. In 1887 Buckley Football Club was formed, and it wasn’t long before they had a taste of success. They went on to win the Wirral & District League in 1898 and picked up the Pike Challenge Cup in the same year. Buckley continued to play right up to the 1920s, and in 1925 joined the Welsh League, North Division. In 1937 they went on to win the North Wales amateur cup. The team had their own pitch at Mill Lane, and soon played home and away matches against teams such as Mold Athletic, Wrexham Victoria, and Rhyl Athletic. 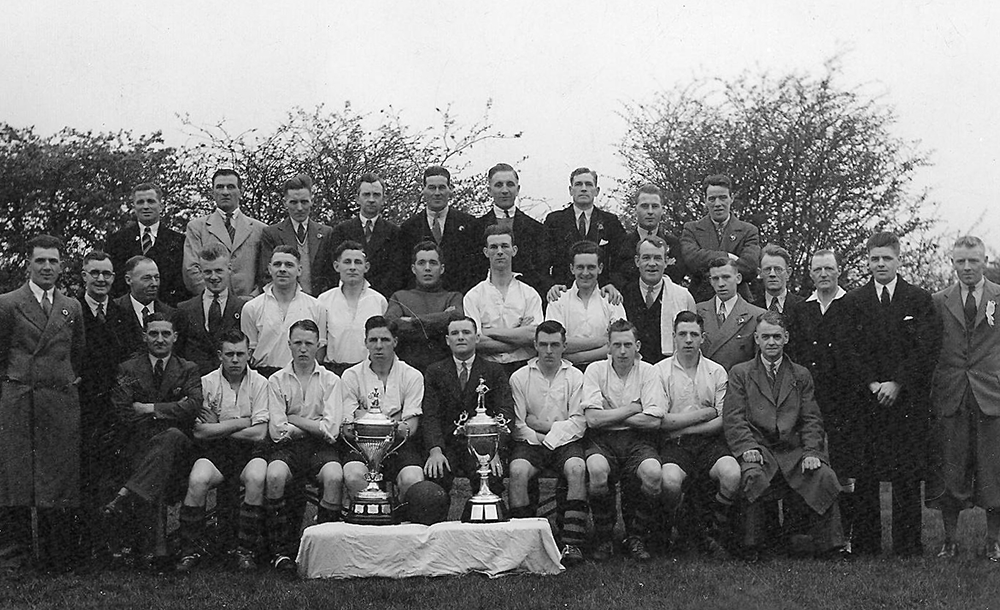 During the 1930’s it seemed that Buckley Football Club and other organised football teams in Buckley fell apart and no longer continued to be successful in competitions. Then, in 1937 Buckley Town A.F.C won the North Wales Amateur Cup. In 1949 Buckley Wanderers and Buckley Rovers were the only two teams playing competitive football in Buckley. Buckley Rovers struggled in the lower division of the Welsh Leagues, while Buckley Wanderers joined the Welsh National League Division One. In their first season, Buckley Wanderers finished runners-up behind Chirk AAA, and again in the 1953-54 season finished runners-up to Overton St Mary’s. Then in the 1955-56 season, Buckley Wanderers scored over one hundred goals to clinch the League title. 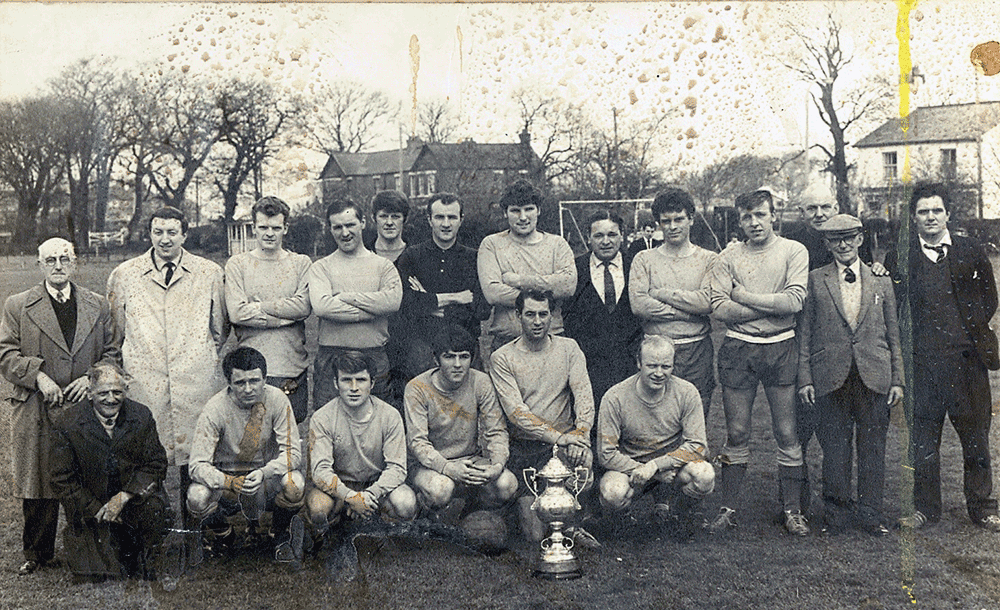 During the 1960-61 season, Buckley Rovers joined Buckley Wanderers in the Welsh League Division One. With two teams firmly established in top-flight Welsh football, Buckley once again was reveling in the ‘Glory days’. Buckley Wanderers finished runners-up for the third time in their history, with Chirk AAA finishing just two points ahead of them. ‘Rovers’ struggled in their first season in top-flight football, finishing ninth in the league. Then in the 63-64 season, Buckley Rovers were relegated, only to come straight back up the following season. From 1974 Buckley Rovers then became the better of the two sides, with a runner-up and third-place finish. The 1976-77 season saw both teams finish in the bottom half of the table. This was the end of both teams, and in 1977 an agreement was made for both teams to join and play under the banner of Buckley Football Club, which is the club we know to this day. The name of Buckley Town FC was adopted for the 1990-91 season when the club finished 5th in the Welsh National Premier Division. 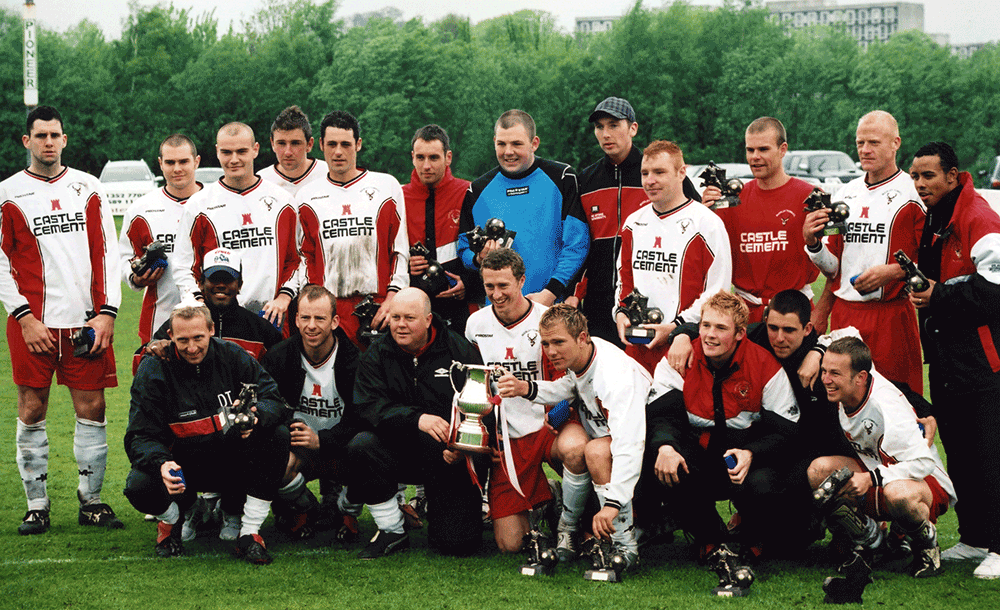 Having placed as runners up in the Welsh National Premier Division during the 1992-93 season the club was elected to the Cymru Alliance League and the second tier of football in Wales. The club went from strength to strength, moved to a new facility at Globe Way, a ground that has progressively been improved ever since. During the first decade of the new millennium, the club had its most successful period to date. They won the NEW Challenge Cup seven times, the Cymru Alliance League Cup once in 2003-04 and in the Cymru Alliance League the club finished 3rd in 2002-03, 2nd in 2003-04, finally becoming Champions in 2004-05. More recently, the club became solid Huws Grays Alliance League performers placing in the top half most seasons, in a league strengthened by the Welsh Premier League’s decision to reduce from eighteen clubs to twelve. 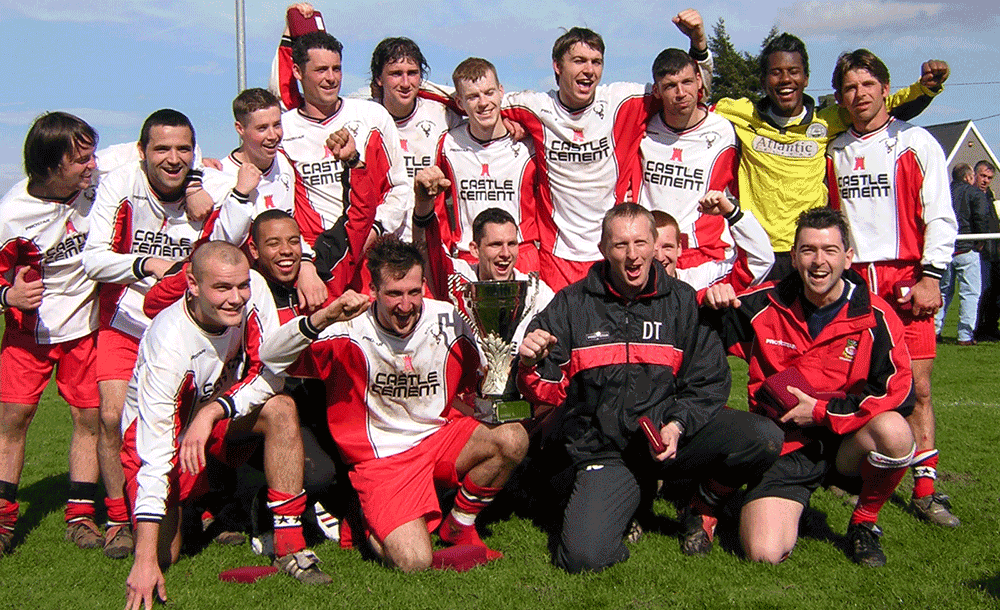 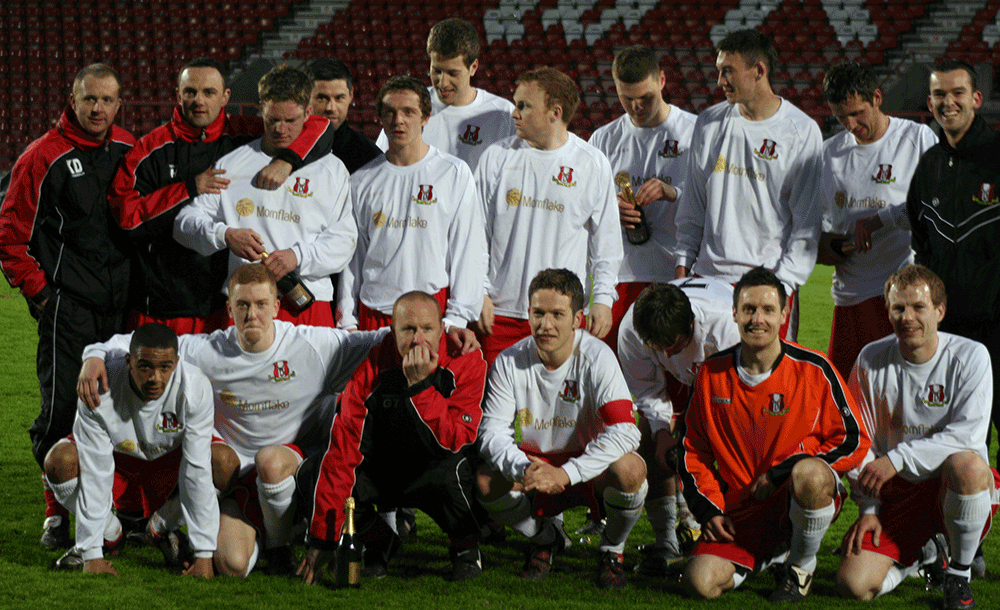 Gareth Thomas managed the club for three seasons and had many successes taking the club to the racecourse for the NEWFA Challenge Cup beating Flint in an exciting final. Gareth went off to pastures new and his place was taken at the beginning of the 2013/14 by Howard Tweets. Near the end of that season, Howard left the club and Gareth Thomas was installed as manager again with a brief of keeping Buckley up in the Huws Gray Alliance League eventually finishing 12th. With League status safely maintained, Buckley Town made massive changes in restructuring the club to financially secure its future. Gareth moved on to manage FC Nomads whilst Tom Taylor moved the other way to take over the reins at Buckley Town. A decision was taken to adopt a five-year plan. This included proposals for the club to be able to break even each season and also to become the center of community life by providing football activities and a framework for youngsters to progress to the first team. 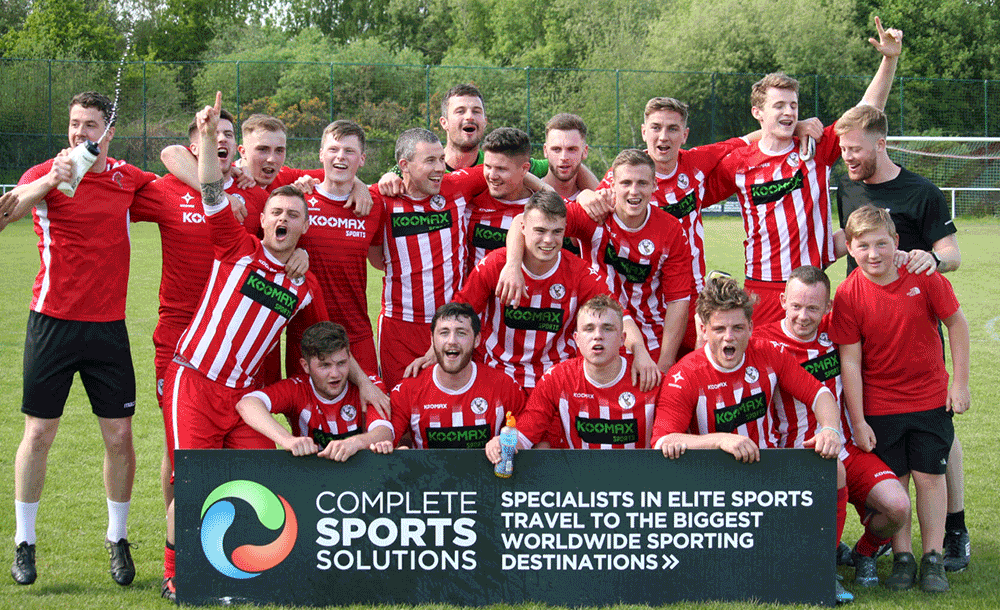 The summer of 2014 witnessed the addition of a new WGI part funded toilet block, bringing Globe Way up to date for the comfort of its spectators. The players’ walk out area had new fencing installed which doubles up as an enclosure for a child-friendly zone in front of the main Club House.

On the playing side, the 2014-15 season started with a completely new team that gelled together very quickly and Tom Taylor’s Buckley Town finished in a creditable fourth position in the league.

The 2015-16 season saw the club begin to struggle in the league finally placing 11th as the overall competitiveness of the Huws Gray Alliance began to take stock.

Unfortunately, the good run came to an end in 2016-17 when the club finished last and was relegated back down to the Welsh National Premier Division, something that the club looked to recover from at the earliest available opportunity.

That opportunity presented itself immediately in 2017-18. A poor start in the league was followed by the side building up a head of steam in the cup competitions.  This instilled a level of confidence in Dan Moore’s squad and they began to grow as a team as things began to gel through the work of a good coaching team. Good away wins in the league at Corwen and then Chirk AAA at the turn of the year, where they turned around a 2-0 loss to a 3-2 win with a Jake Roberts wonder strike, saw the squad bolstered by some key signings in the January window.

With the awful weather taking its toll on the fixture list, the remaining league games were compressed into March, April, and May. Another tremendous away win at Cefn Albion where they demoralised the opposition with a second-half display that simply blew them away, both in the game and as contenders, left two key games against Brickfield Rangers to decide who won the league.

Both these games ended in draws, both due to late late goals by Aled Bellis, the latter being a penalty in the dying minutes of the game in front of a crowd of 604 at the Globe. Last-minute, last game. What a way to become WNL Premier Division Champions and gain promotion back to the Huws Gray Alliance with a young team both on and off the field that can only bode well for the future.

The 2018-19 season saw the team consolidate their position in the league, being as high as third at one point only to finish top half in eighth. Naivety at this level saw the side lose games that they should have won a number of occasions during the season and the biggest lesson learned was that you have to close out games when ahead in the dying minutes.

For 2019-20 the squad stayed the same, with every player remaining at the club despite others trying to tempt them away, a testament to the group and the community ethos we foster at this club. Sam Spridgeon joined from Oswestry Town and Pat Hinchcliffe from Denbigh Town. Tom Smith returned to the club having started his career with us at this level, meaning we had more quality in depth.

An indifferent start led to a low league position which was hampered by the inability to get a game on at the Globe because of the inclement weather. At one point we thought we were about to become the new home of the Ark, as it rained constantly for 40 days and for 40 nights.

The side continued to pick up points away from home and following the turn of the year they began to pick up real momentum and league positions, most notably at Llandudno in a Force 10 Gale off the Irish Sea. Then in March COVID-19 reared its ugly head and with the curtailment of the season, we finished in 10th position but would have placed higher had we been able to play football. 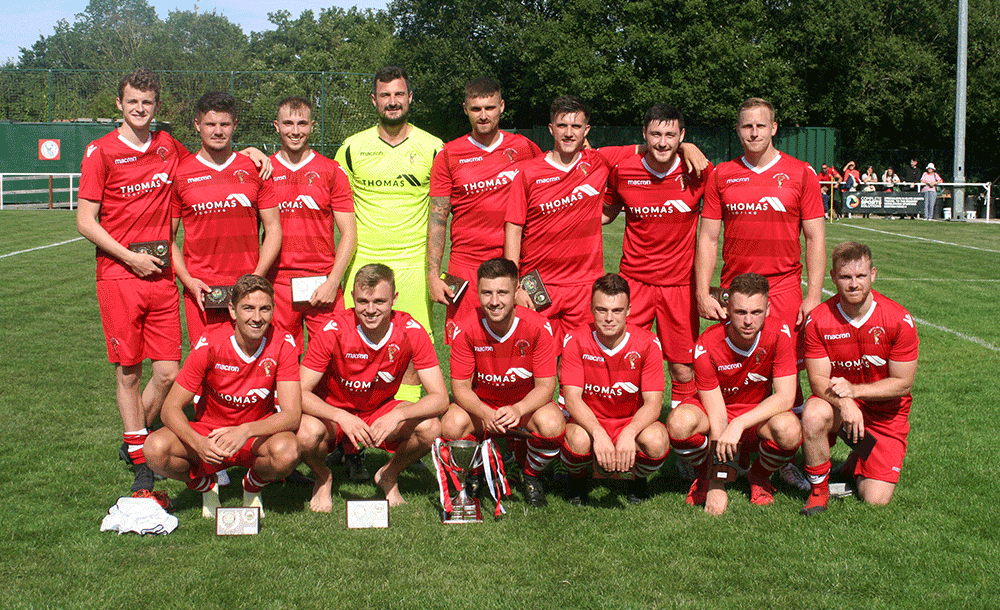 All content courtesy of Nic Johnston ©. No reproduction without written consent.