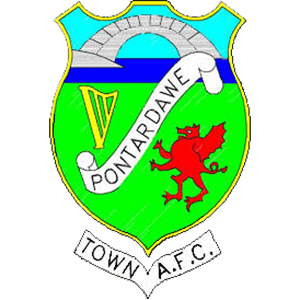 Although the present club was founded in 1947, football in Pontardawe certainly stretches back over 100 years, into the closing years of the 19th Century, when a Pontardawe club, run by industrialist CF Gilbertson, was among the members of the earliest Swansea League and won the championship in 1899-1900. The club went on to join the Swansea and District League in the early 1900s, playing familiar names like Swansea Town, Morriston, Skewen, and Clydach, as well as long-forgotten ones such as Mond Nickel, York Place, and Sketty. But honours don’t seem to have come their way in the first half of the 20th Century; the club never even reached the top division of the Welsh League and it disbanded during the Second World War.

Reformed as Pontardawe Athletic in 1947, the town club entered the Welsh League, playing in division two (west). The first few post-war years brought reasonable success at this level and by 1959/60 they were challenging for promotion, finishing 3rd behind Carmarthen and Clydach, achieving a Division One place a year later despite finishing below Gelli Colliery. But relegation came swiftly in 1961-62, Ponty finishing 19th out 20 and going back down with Milford. By the mid-1960s the club was struggling in the middle section of the restructured Welsh League and by 1980 they dropped to the lowest division.

A period of comparative success followed in the early 1980s, with successive promotions taking the club back to the top flight of the Welsh League by 1982. 1981 / 82 was Ponty’s best-ever season – not only did Dixie McHale’s team win promotion, finishing second to Brecon Corries but they reached the quarter-finals of the Welsh Cup, hosting a Wrexham side containing Dai Davies, Joey Jones, and Dixie McNeil. (Record books show the result as 5-1 though the club’s history says 4-1).

Competing in the Premier Division for only the second time in their history in 1982-83, Pontardawe Athletic managed to lift the West Wales Senior Cup and in the league they held their own, finishing 13th – but luck wasn’t on their side, the league restructured and as Athletic lacked a ground adequate for the Welsh league’s self-styled “National Division” they were dumped back into the middle section, curiously known as the Premier Division, for 1983/84. Ponty went into decline again, slipping back to the third level of the Welsh league by the mid-1980s, quietly remaining there for over a decade.

The first Welsh league championship – of the Third division – finally came in 1996, after 50 years of membership but the club’s progress up the league was almost halted on ground criteria again, as council bureaucracy meant Pontardawe was one of the last clubs at this level to erect a covered stand. But the club was now on a definite upward curve, its youth side lifting the Welsh Youth Cup and MacWhirter League title in 1997, and the senior side gaining promotion to the First Division in 1998. This time the club (now adopting the name of Pontardawe Town) lasted 6 seasons and then returned to the top flight for the 2005-06 season after winning the Second Division and losing to Goytre in the Shamrock League Cup final. Their return to the First Division saw them finish third in the table and again finishing runners up in the Shamrock League Cup.

The club has now relocated to Parc Ynysderw which is a ground now dedicated to the club and the committee has invested time and money to bring the ground to Welsh League standard which it achieved in August 2015. More work and money are needed but the club now has the foundation to further develop and return to the top flight. Another, and possibly most important factor, is the Junior Section which is one of the best in the country running over 20 teams including Academy, Minis, Juniors, and Girls / Ladies. Success at all age groups means that the trophy cabinets are bursting at the seams and long may this continue.