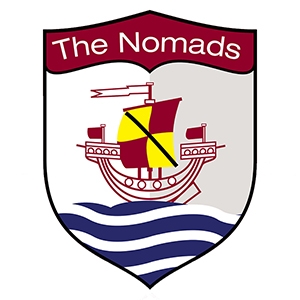 The first Connah’s Quay club was founded in 1890, playing in the Golftyn area of the town close to the present stadium. The club reached the Welsh Cup finals of 1908 and 1911, losing respectively to Chester and Wrexham, but was disbanded soon afterwards. A new club, Connah’s Quay & Shotton, was formed in 1920, renting land at the rear of the Halfway House hotel from the Northgate Brewery, and becoming members of the Welsh National League (North), as a fully professional outfit, in 1922.
In 1928, the club moved to Dee Park, Shotton and won both the Welsh National League (North) championship and the prestigious Welsh Cup in 1929. In the final they defeated First Division Cardiff City 3-0 at Wrexham’s Racecourse Ground. Cardiff’s team, incidentally, contained several players who had beaten Arsenal in the 1927 F.A.Cup final. Six months later, however, Connah’s Quay & Shotton folded with debts totalling more than £1,000, leaving Connah’s Quay Albion to carry the town’s soccer banner through the second war.

Formed in July 1946 as Connah’s Quay Juniors, the present-day Nomads club was the brainchild of the Everton and Wales centre-half Tommy (T.G.) Jones, a native of the town. Attracted by the reputation of the famous international, the Deeside youngsters flocked to join the new team which quickly became a major force in North Wales youth soccer, winning the Welsh Youth Cup in 1948.

By natural progression a senior team was formed and joined the Flintshire League in 1948. Success soon followed and Connah’s Quay Juniors reached the final of the Welsh Amateur Cup in 1950/51. Prior to the 1952/53 season, the suffix Nomads was adopted and the team ventured into the Welsh League (North). Though unsuccessful in their challenge for the league title, Connah’s Quay Nomads once again contested the final of the Welsh Amateur Cup, this time winning the trophy against Caersws Amateurs. The club also reached the semi-final of the Welsh Senior Cup before going down to Football League side Chester at Wrexham’s Racecourse ground.
Despite winning the North Wales Amateur Cup three times in the 1950s, Nomads’ fortunes took a dip and the club moved into local football for seven years prior to rejoining the Welsh League in 1966, twice finishing as runners-up at the start of the 1970s. In 1974, however, the club joined the newly formed Clwyd League and spent more than a dozen seasons at this level, winning the championship twice.Without doubt, Nomads’ most successful season was 1980/81 when they won seven trophies including the Welsh Intermediate Cup, beating Newport YMCA in the final, and the Clwyd League without losing a game. Following three successful seasons in the Welsh Alliance, Connah’s Quay became founder members of the Cymru Alliance in 1990 and the League of Wales two seasons later.

Finishing eighth in the new national competition in 1992/93 was a fine achievement after a poor start as was Nomads’ appearance in the semi-final of the Welsh Cup despite the disappointment of a 2-1 aggregate defeat against Clwyd rivals Rhyl. Neville Powell joined the club in the summer of 1993 and has steadily built up his team into one capable of challenging for a European place. Within 12 months of Neville’s arrival, Nomads won the North Wales Coast FA Cup and, in 1995/96, battled through to win the League of Wales League Cup, beating Ebbw Vale in the final at Caersws.

The 1997/98 season was probably the most successful one of recent times, as the club finished seventh in the League of Wales, thus gaining entry into the FAW Premier Cup, and also reached the final of the Welsh Cup for the first time. Unfortunately, Nomads missed out on a European venture when Bangor City snatched a last-minute equaliser and won the cup in a penalty shoot-out. The club’s home since 1946 was the Halfway Ground, but in July 1998 Nomads moved into the newly constructed Deeside Stadium.

Connah’s Quay have made steady progress during the five seasons from 1998/9, from 12th place to fifth.

But 2003/4 saw them clinch a top eight spot by the skin of their teeth. After a couple of disappointing seasons, Nomads were forced to ground-share at Flint’s Cae-y-Castell while their Deeside Stadium pitch was relaid. But it produced a great improvement and they just missed out on a first-ever place in Europe, equalling their highest-ever Welsh Premier finish of fifth.

Nomads ground-shared at Flint’s Cae-y-Castell in 2006/7 while the Deeside pitch was relaid.

The season was ended with the departure of long-serving manager Nev Powell to his old playing club Bangor City, with Jim Hackett appointed in his place.
Hackett’s reign only lasted 12 months – although the club survived in the top flight, his contract was not renewed and Nomads were taken over in June 2008 by GAP Personnel, with Caernarfon boss Steve O’Shaughnessy leaving The Oval to take over. But, at the end of the following season and despite a ninth-placed finish, the club parted company with O’Shaughnessy and Hackett was recalled for a second spell on Deeside.

Nomads finished in a respectable ninth position but the following season, 2009/10, proved to be the end of their 18 years’ unbroken membership of the top flight.
Under player-manager Mark McGregor and coach Ken Price, Quay only finished in 14th-place, missing the cut for the new 12-club Welsh Premier and also failing to gain the necessary FAW domestic licence.

The Nomads bounced back by winning the Huws Gray Alliance title at the first attempt but were controversially denied a licence and were forced to remain in the second tier. Undaunted, they clinched the title for the second time in a row and, after also gaining their licence, returned to the top flight in 2012.