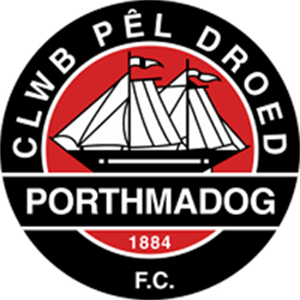 Porthmadog Football Club, one of the oldest in Wales, was founded in 1884. They were North Wales League champions in 1902/03 and reached the final of the Welsh Amateur Cup in 1905 -06 but had to wait until 1937-38 before they gained another championship.

The ’50s, ’60s and ’70s were highly successful decades for Port. The Welsh Amateur Cup was won in 1955/56 and 1956/57. The arrival of Mel Charles heralded more success. Port were league champions in three successive seasons between 1966 and 1969. Also in 1966, they played against Swansea in the Welsh Cup at the Vetch, before a crowd of 10,941. In the seventies, they were twice champions and topped the Welsh Alliance in1989/90. This secured Port a place in the newly formed Cymru Alliance (1990). In 1992, Port became inaugural members of the League of Wales.

Thanks to a late surge, the team finished in a creditable 9th place in their first season. This was largely thanks to free scoring striker Dave Taylor. Dave went on, in his second season, to become the league’s top scorer as well as Europe’s highest. During his spell at the club, he scored 62 goals in 66 games.

Despite the 70 goals netted by Dave Taylor and Marc Lloyd-Williams, in the 1993-4 season they finished in 11th spot. Port did, however, break another record – the highest League of Wales attendance. A crowd of 2,500 came to see Bangor clinch the league title.

The 1994/95 season started with a new manager, following the surprise decision to replace Meilir Owen. Ex-Wales International, Ian Edwards became manager but, after a good start, the team slipped down the table and he was also replaced. Things went from bad to worse after Mickey Thomas, ex-Man. U., Wrexham and Wales, took charge. The team came close to being relegated.

For the 1995/96 season Colin Hawkins was promoted to the manager’s job. The club nearly folded because of serious financial trouble and a disaster was averted thanks to the hard work of the directors who re-launched the club as a limited company and £10,000 was raised through the sale of shares.

In 1996/97, with the financial situation improved, the team had a fine start to the season. No home game was lost until the New Year and, when champions Barry came to the Traeth, it was second against fourth. One of Port’s most influential players was Paul Roberts. Before leaving the club to join Wrexham for £10,000, he had played for Wales Under-21 and was the league’s leading scorer. After Paul’s departure Port slipped to tenth place but still lifted the North Wales Coast Challenge Cup.

In the 1997/98 season, Port’s time in the League of Wales came to an end following a poor run of form towards the end of the season. Knowing what has happened since in this league, it is a cause for amazement that Porthmadog lost their WPL status despite ending the season in 4th place from the bottom.

Back in the Cymru Alliance, things went down hill after a good start. But some pride was restored as they won the League Cup. They could only manage 5th spot in 1999-2000 despite a run of victories after Viv Williams had succeeded Colin Hawkins.

Viv, together with assistant-manager Osian Roberts, re-built the team and 2002-03 proved to be one of the most successful in the history of the club. Every home game was won and the only two away defeats came after Port had already gained promotion. They returned to the WPL with a 19 points advantage over their nearest rivals. Port also lifted the League Cup and North Wales Coast Challenge Cup.

Under the management of Viv Williams and Osian Roberts, the club took the step back into the WPL and finished season 2003/04 in 12th position. In the following three seasons, they finished in 11th place without any relegation worries. In 2006/07, the club reached the semi-final of the League Cup. By this time, Osian Roberts had become the manager with Viv Williams assisting. For the greater part of the season, the dark cloud of the FAW’s unreasonable punishment, for racist remarks by one individual, cast its shadow over the club. A satisfactory conclusion to this saga was not achieved until the club had taken the matter to an independent sports tribunal and this provided a fair hearing and, at last, justice.

With the departure of Osian to a senior coaching position at the FAW and Viv deciding to call it a day after 7 years at the helm the club entered a period of uncertainty and results consequently suffered. During the three seasons 2007/10 the club had four different managers with Clayton Blackmore being dismissed after a few months and Viv Williams returning to take temporary charge helping the club to retain its WPL status. Paul Whelan became the third manager to fall by the wayside to be replaced by the experienced Tomi Morgan. Though the club once more narrowly retained its WPL place in 2008/09 league reorganisation meant that six clubs were relegated in 2009/10 and this time there was no hiding place for Port as they were demoted to the Cymru Alliance.