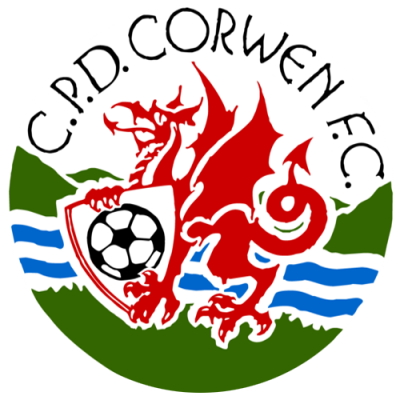 Corwen F.C. is a Welsh football club based in Corwen, Denbighshire, playing in the Welsh National League (Wrexham Area) Premier Division in 2008-09 season. The earliest mention of football in Corwen is their entry into the inaugural Welsh cup in 1877. After beating neighbours Bala 1-0 after a reply they lost heavily to Bangor.

Corwen’s recent revival started as early as 1966 in the wake of England’s World Cup success when a new committee was formed. Success was soon to follow gaining promotion to the 1st Division from the 3rd Division in 2 seasons of the Welsh National League (Wrexham Area). This progress however did not continue however due to the retirement of players and others moving on to other clubs.

In 1986/87 things improved again and within two seasons they were in the reformed Premier division, winning the Division 2 League and cup double in 86/87 and the Division 1 League in 87/88.

In 94/95 and again in 97/98 they finished runners up in the League but season 98/99 they at last managed to win the championship. Promotion to the Cymru Alliance proved too testing for the team so they returned to the Welsh National Premier Division the following season.

In 2000 the club dropped ‘Amateurs’ from the name of the club, and are now known simply as Corwen Football Club.

2004 saw Corwen’s First Team win the Division One League Cup after a win against Brymbo at Llangollen Town, after the disappointment of relegation from the Premier Division the previous season. They coupled this with promotion back to the Premier Division after finishing 3rd in the league.

In 2008 Corwen reached the F.A.W. Trophy final, where they lost 4-2 to fellow Welsh National League side Rhos Aelwyd at Cefn Druids ground. Corwen came through 3 penalty shoot outs on the way to the final.

The Reserve team, managed by Richard Crimp, gained promotion from the Welsh National League Reserves and colts Division, after finishing second in the 2009/10 season, finishing a point behind champions Ruthin Colts. The Reserve team finished 10th out 15 in their first season in the Welsh National League Reserves Division, and finished an impressive 5th out of 17 in their second season, suffering only one home defeat.

After the departure of John James and Andy Lewis, who left to take over the vacant Denbigh Town post, Corwen appointed former Ruthin Town Reserves manager Neil Jones as first team manager for the 2010/11 season, and was being assisted by Corwen vice Chairman and striker Andrew Roberts.

Corwen finished runners up in the 2010/11 Welsh National League Premier Division League Cup, after a 1-0 defeat to Gresford Athletic, the first to take place at Cefn Druids new ground ‘The Rock’.

Neil Jones stepped down as First Team manager due to work commitments at the end of the 2011/12 season, and was replaced by former Chairman John Billington. John had led Corwen to the Second Round of the Welsh Cup, and a mid-table finish in the Welsh National League Premier Division.

Steve stepped town at the end of the 2016/17 season after leading the team to a 4th placed position in the league, missing out on 3rd on goal difference. Steve was replaced by former Bala Town FC player Danny Jellicoe.