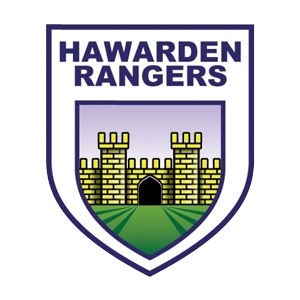 Hawarden Rangers FC is a Welsh football club playing in Hawarden, Flintshire, after being founded in 1974 by Elwyn Owen. Since 2005, the Senior teams have been members of the Welsh National League (Wrexham Area), having previously been members of the Clwyd League. The Junior sections consist of teams ranging from U6 to U16, all of which compete in the Queensferry Sports Flintshire Junior and Youth League.

Hawarden Rangers Football Club was formed in 1974 by Elwyn Owen.

The club’s patron is the grandson of Victorian Prime Minister Sir William Gladstone, who had the foresight to leave the Gladstone Playing Fields to local people for future enjoyment, which explains why the Hawarden castle gates are visible on the club crest.

At adult level, the club were founder members of the Clwyd League, which was set up to improve the level of competition in the area while the junior section of Hawarden Rangers was created in 1984 by the amalgamation of the two local teams Hawarden Wayfarers and Hawarden Pathfinders.

Following the amalgamation, the club became known as Hawarden United before changing to Hawarden Rangers Football Club which now has over 200 junior playing members aged 6-16 plus senior teams.