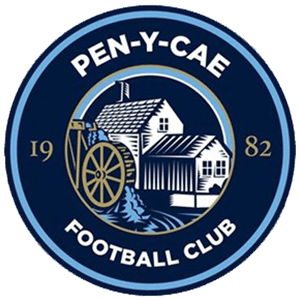 Pen-y-cae Football Club has continued in its tradition of growth and development from its humble beginnings in 1982. The club continues to strive to provide an inclusive sport for those who reside within the parish of Pen-y-cae, but also welcomes others from the surrounding communities.

In 2005 the football club secured the lease on there Afoneitha ground and have since made huge strides developing it both on and off the field for all levels at the club.
The senior team currently play in the Welsh National Premier League, for the forthcoming season their home kit has been kindly sponsored by “Jones-Roberts Brothers” and the away kit by “Baker scaffolding”. Pen-y-cae has also had a long history with youth football and continues to encourage growth within the youth sections.
The Football Club currently has four sections of boys mini-football running from Under 7s to Under 11s, we also have an Under 12s,14s,15s and an under 16s which compete in the Wrexham & District Youth League.

Pen-y-cae Football Club is committed to raising the standards of youth football development and the safety of players who participate within organized activities for there enjoyment. We place a high value on commitment to the club and in that ethos progress our growth through positive encouragement to players, managers and committee members alike.As a team, we maintain the need to develop a comprehensive format of procedures to enable the club to provide young people and players with opportunities to develop their sportsmanship qualities, football skills and sense of community and team spirit. Whilst we acknowledge the main aim of our club is to promote football within the village of Pen-y-cae, we also realise that legislation dictates how and in what way we promote and direct our activities. Our policy document is therefore an ongoing process and hopefully will continue to be developed, reviewed and revised on a regular basis. We as a club hope our policy will provide parents with a greater understanding of our commitment to engaging young people of all ages in a sense of being, self worth and team spirit.

All coaches involved with Pen-y-cae Football Club have completed the F.A.W. foundation courses and have been CRB checked.

Another tradition Pen-y-cae Football Club is proud of is its Charity work. Over the years it has raised thousands of pounds for various causes particularly through its work with the Karl Thomas Charity football matches and in 2008 the club with the support of Karl’s family set up the Penycae and Karl Thomas Memorial Fund to support worthwhile causes in the village. In April 2013 the club finally opened The Karl Thomas Memorial Hall at the ground after spending 18 months renovating the building. This facility now allows the club to cater for both home and visiting teams with refreshments after the match.