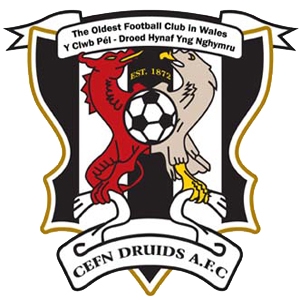 In 1872 Plasmadoc Football Club, founded three years earlier, became Druids when the various colliery and quarry teams in the hills around Ruabon and Cefn Mawr were brought together under one banner.

Six Druids players were in the first Welsh international side which played Scotland on 25 March 1876 – the most from a single club ever to play for Wales – whilst the first secretary of the Welsh FA, Llewelyn Kenrick, was also an ex-Druid.

In 1876 Druids entered the English FA Cup, the first Welsh club to do so, and in 1882/83 they defeated Bolton Wanderers in the fourth round, losing to eventual winners Blackburn Olympic in the quarter finals.

Druids played in the very first Welsh Cup game at Newtown on 13 October 1877, just a week after playing Scottish giants Queens Park at Hampden Park, and ended up as runners-up to Wrexham in the first Welsh Cup Final in 1877/78. Druids were finalists in the first six years of the competition and became the first club to win it three times in succession by lifting the trophy from 1880-1882. In all Druids have won the Welsh Cup eight times.

The club joined the first Welsh League in 1890 and rose again towards the end of the nineteenth century with more silverware.

In 1920 the club left Wynnstay Park to combine with Rhosymedre to become Rhosymedre Druids, playing at Church Field. They merged with Acrefair United in 1923, becoming Druids United, but were perennial strugglers in the Welsh National League (North) until stepping down to the Wrexham & District League in 1930, moving to yet another new ground, this time in Acrefair.

League form improved during the 1950s and, in 1957, Druids United reached the Welsh Amateur Cup final, losing to Porthmadog in a replay at Bangor. In that same season the club won the first of two consecutive Welsh Youth Cups.

Profit from the Amateur Cup run enabled the club to fund the layout of a new ground on derelict land in the centre of Cefn Mawr, which became the club’s home for over 50 years. A young George Best was part of a Manchester United XI that provided the opposition for the first match there.

But enthusiasm at Druids had waned by the 1980s when Druids were being outstripped by arch rivals Cefn Albion, who were formed in 1967.

Albion played initially at The Bont, then at Rhostyllen, Ty Mawr and Church Fields before settling back at Ty Mawr, scooping numerous pieces of silverware as they climbed the Welsh National League (Wrexham Area).

A merger between the two clubs was resisted until former Chester manager Ken Roberts intervened to convince the rival factions that an amalgamation was in the best interests of everyone. Thus, in 1992, Cefn Druids FC was born, playing at Plaskynaston and carrying the white and black colours of the original Plas Madoc club.

The club steadily consolidated in the Cymru Alliance, helped by a renewed youth policy, and under Gareth Powell, strolled to the 1998/99 Cymru Alliance championship, scoring over 100 goals in the process.

The club marked its arrival in the League of Wales with a 1-0 win at Inter Cardiff, the previous year’s runners-up, in its very first game and, in 2001/02, reached the semi-finals of the Welsh Cup.

A succession of managers were unable to prevent the Ancients from finishing in the second relegation spot at the end of the 2004/05 season but with only one team from the feeder leagues being promoted, Druids survived the drop.

For several years the possibility of a new stadium for the club was touted as the Plaskynaston land was earmarked for a supermarket and the existing stadium was showing signs of its age. But delays to the start of construction to the new ground meant the club was going to struggle to meet the criteria for the revamped 12-club Welsh Premier League. The club cut its cloth accordingly as relegation appeared certain with the club battling at the wrong end of the table.

When the inevitable relegation happened Druids returned to Rhosymedre in 2010 when the new stadium, The Rock, was completed.

The 2011/12 season saw the club reach the Welsh Cup Final for the first time in 108 years after claiming the scalps of Premier League sides Prestatyn Town, Aberystwyth Town and Airbus UK Broughton. A 2-0 reversal by The New Saints ended the club’s fairytale story but, as the winners had also won the Welsh Premier League, Cefn Druids reached Europe for the first ever time.

In addition the Welsh Cup run, Druids won their first trophy since 1999 after a 4-0 win over Ruthin Town at Wrexham’s Racecourse Stadium gave the club the North East Wales FA Challenge Cup.

The 2012/13 season started with the Europa League First Qualifying Round tie against Finnish side MyPa-47, who had previously faced Liverpool in European competition. A creditable goalless draw in the first leg at the Racecourse Stadium was followed by a 5-0 defeat in Finland.

Domestically, despite a mid-season wobble, the club finished second in the Huws Gray Alliance and achieved the FAW Domestic Licence.

The 2013/14 season saw Cefn Druids storm to the Huws Gray Alliance title, losing just one match in the process. And, with the Domestic Licence again awarded, promotion to the Welsh Premier League was achieved.

In addition the NEWFA Cup was again secured with a 2-0 victory over Ruthin Town in a repeat of the 2012 final, and ensured Druids repeated the double of 1999.

The club’s return to the Welsh Premier League was shortlived, however, as an 11th placed finish saw the club relegated back to the Huws Gray Alliance after just the one season back in Wales’ top flight.